The whole world watched the run-away homemade hot air balloon and feared the worst for the little boy who was later found safe and sound at home. As details emerge about the family and their huge hoax to get on a reality TV show, the proof is in the kid — forever known as “Balloon Boy.” 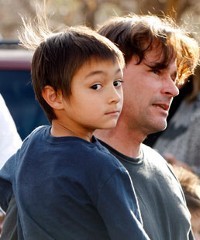 The nation was mesmerized by the bizarre news only to be shocked hours later. On CNN’s Larry King Live, the Heene’s strategy started unfolding before their very eyes as Falcon — “balloon boy” — unwillingly ratted them out. His parents are now facing a number of charges in Colorado as well as being under federal investigation.

The Fort Collins couple could possibly be charged with several counts such as conspiracy, contributing to the delinquency of a minor and attempting to influence a public servant. It’s likely they’ll be charged with filing a false police report, too. This is a misdemeanor.

The Heene Family is not unfamiliar with wanting their 15 minutes of fame as they appeared on ABC’s Wife Swap.

For a family known to go to sleep in their clothes in case they woke up in the middle of the night to chase storms, their bizarre inventions and unconventional family outings were not surprising to neighbors. After all, Richard and Mayumi Heene were on Wife Swap in October 2008 and then later voted to re-appear on the 100th episode of the show that aired in March 2009.

In fact, it’s not unfamiliar for the family to chase storms, do blowtorch sidewalk “shoveling” and put marshmallows on top of their nacho desserts. Richard, the father, is a construction contractor and amateur weather researcher and author — focusing often on meteorology.

Richard and Mayumi chase storms with their three sons, one of whom, Falcon, was the center of a major scare yesterday.

The six-year-old missing boy was believed to be in the balloon that traveled over 50miles across Colorado. Apparently the balloon was never intended to have passengers on it and was an anniversary gift between the couple. Well, later as the little boy was found in a box in the family’s attic, suffice it to say, their parents along with the nation breathed a major sigh of relief.

More on the Balloon Boy