SheKnows has a A Sex and the City sequel scoop…and yes, it involves Miley Cyrus! 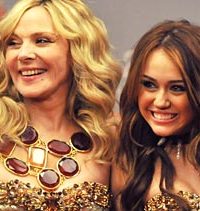 “Mother of God, she is wearing the same
dress as Hannah Montana,” says Anthony (Mario Cantone) in the Sex and the City: The Movie sequel.

There’s been much chatter over whether Miley Cyrus had landed a cameo in the Sex and the City sequel, but now it’s official: She
was caught silver-plated and ready for action on the NYC set last Friday!

Based on her short storyline, she’s not the only one silver-plated. Samantha has red carpet “Don’t” moment when she decides to wear something young and hot for the premiere of Heart of the
Dessert, the newest flick starring hunky Smith (Jason Lewis), and finds herself wearing the same thing as
17-year-old teen queen Miley!

They’re both in a strapless, fitted disco ball gown, which is actually silver and gold from the looks of it.

Samantha has on a chunky topaz necklace, while Miley goes for a spiked choker and black full length gloves.

Word is Miley doesn’t have any lines in the cameo, but Anthony (Mario Cantone) gets to cry, “Mother of God. She is wearing the same dress as Hannah Montana!”

Ouch! As anyone can see from the pictures, Miley has nothing on steamy Samantha — portrayer Kim Cattrall is still just plain smokin’ hot!

But, the
red carpet moment is sure to be an ego crusher for the one of our favorite fictional characters of all time.

The weekend shoot that’s getting so much attention was at the Ziegfeld Theater, and Sarah Jessica Parker (Carrie Bradshaw) and Chris Noth (Mr.
Big) were also on-hand.

The Sex and the City sequel is due out May 2010, and word is it will also offer cameos by Penelope Cruz, Liza Minnelli and
Project Runway’s Tim Gunn.

More SheKnows Sex and the City

Our chat with Kim Cattrall, Kristin Davis and Cynthia Nixon

Sex and the City: fashion as character