In their latest flick, Motherhood, Uma Thurman portrays an urbanite mom juggling the challenges, trials and tribulations of managing the household and marriage. She is navigating raising
two kids and the madness of alternate street parking rules. Minnie Driver plays her British single mom sidekick.

We caught up with the prolific actresses to dish about — you guessed it: Motherhood, both in life and on screen. 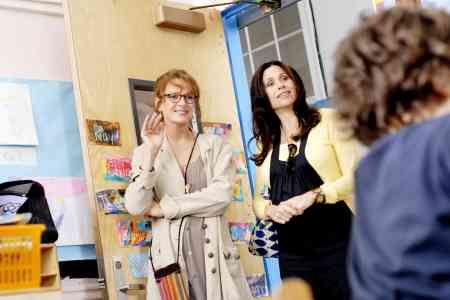 SheKnows: What does motherhood mean to each of you?

SheKnows: What advice would you give moms to create a balance?

Uma Thurman: Just do your best. I don’t know how else to say it, forgive yourself, try to enjoy yourself.

SheKnows: Do the kids realize how hard it is?

Uma Thurman: You don’t want them to. If they think the mother’s being beaten down, that makes them very vulnerable because they depend on you. They know they need you
to survive. You’re their survival.

Attack of the Mamarazzi!

SheKnows: Can you talk a little bit about challenges filming with the paparazzi or in this case, the “mamarazzi?” 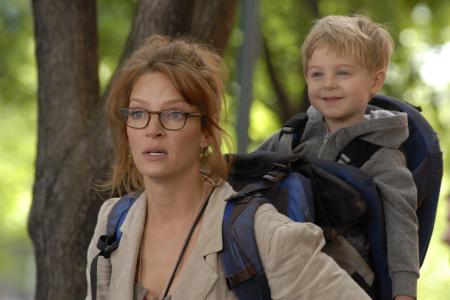 Uma Thurman: Yeah, we had mamarazzi on the set, real and imagined… digital cameras have been the worst things because at least in the old days when they had to pay for the
film they’d try to get a shot and go away.

SheKnows: I thought it was interesting in the movie your character lost a sense of identity through her writing. What advice would you give moms who may have also lost their
identity? 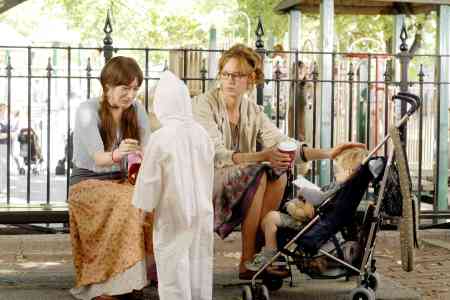 Uma Thurman: Just know you’re in the same boat as the rest of us. It’s a very crowded boat. I don’t know where those identities have gone actually, they’re
on their own little boat…have you seen my identity? Last seen on September 12th: my identity (chuckles).

?SheKnows: What advice can you give to moms as well about maintaining their identity when they have children?

Minnie Driver: This is a bit tough because my job is about losing my identity constantly. I think it’s very challenging for women certainly who have the economic
challenge…how do you balance it? If you don’t have childcare and it’s just you and your husband’s out to work or maybe you work, how do you do it? I think the things that
challenge us most are often our greatest teachers. I think women just need to pick one thing that you do for you in your week if you can’t even do it in your day. Whether it’s going for
a swim in the evening with your girls or whether it’s going for a glass of wine while your husband watches your kids one night each week. You have to find that one thing. I’m lucky,
Henry goes everywhere with me. When I’m working I have full-time child care. When I’m not working I’ve got myself and friends and babysitter once in a while.

Minnie’s as a first-year mum

SheKnows: What’s been the biggest challenge for you as a mom his first year? 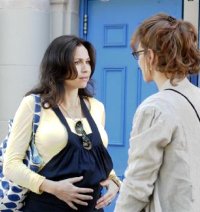 Minnie
Driver: I think working and having Henry. I was breast feeding during the movie I made with Hilary Swank in February. He was only four months old, that was hard core. Being in Michigan and
minus 10 degrees and worrying about him; I couldn’t focus on the part very well.

SheKnows: Was that for Amelia?

Minnie Driver: No, that was for Betty Anne Waters which I truly believe Hilary will also be nominated for (an Oscar) along with Amelia — which I
(also) believe she’ll be nominated for. She’s amazing. But the movie I just made was easier. I got into the groove more and it was easier. We were in Montreal for close to two
months. I think it was him being a little bit older, me being more of the saddle of being a mother…that first year is incredibly intense. You don’t know if anything you’re doing
is right. I felt like I was going to do some terrible thing that would fall apart. It’s logistics like you see in this movie — your car getting towed in a day where your car just can’t
get towed. You see how the house of cards falls. On a very tight schedule when you remove one piece of the puzzle, you’re screwed. It’s rough.

SheKnows: Since this film depicts the main character as harried in Manhattan, do you think that motherhood would be drastically different in an urban setting versus suburban
setting?

Minnie Driver: I don’t think we’ve seen the harried mother…I think in popular culture in recent years Cynthia Nixon’s character in Sex and the City is the only single working mother we’ve seen in New York City. I think it’s an interesting meditation because
clearly there are millions of people who are doing it. Dealing with an urban setting adds another dimension and character in the movie which I think is interesting.