Paranormal Activity, a major horror flick that you won’t want to see alone, has become a word-of-mouth smash. 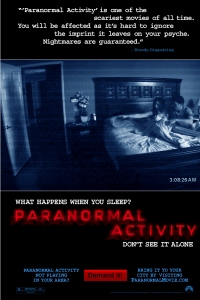 Hollywood is a funny business.
Sure, you know a celebrity can be hot one day and so not hot the next. But when it comes to the biz of making films, it’s quite difficult, tricky and costly to know what will be shown on big
screens across the country and ultimately make the moolah.

Paranormal Activity cost only $11,000 to make and yet brought in a whopping $7.9 million at the box office last weekend.

The thriller is apparently resonating with audiences and scaring the heck out of them. Here’s why: after a middle-class couple moves into a typical suburban house, they start freaking out by
a presence that may or may not be demonic. Regardless, it’s “active” in the still of the night, in particular when they’re sleeping.

Enter Paranormal Activity whose big screen accomplishments have been, um, anything but normal. The film was made in 2007 and stars relative unknowns such as Katie Featherston, Micah Sloat,
and Mark Fredrichs. Paranormal Activity has become the thriller of the year to the point people are “tweeting” their scream. As a top trending topic on Twitter, even
celebrities are on the Paranormal Activity train.

Jordin Sparks from American Idol tweeted “Just saw Paranormal Activity…it was really good but it was so scary! Omg. I
don’t know how I’m going to sleep tonight. Omg. Omg.”

Where the Wild Things Are rules the box office

Precious: a preview at the early Oscar contender

56 mins ago
by Reshma Gopaldas

60 mins ago
by Daisy Maldonado