Stephanie Pratt, star of The Hills, was arrested at approximately 3:45 am on Sunday in Hollywood for a DUI. 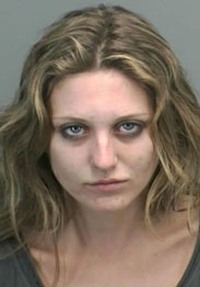 A sergeant in the LAPD told
People, “It was your basic DUI. Our traffic officers driving down the street spotted her and pulled her over.”

LAPD also reported the twenty-three year-old was cooperative and there weren’t any issues with her arrest.

Pratt was charged with a misdemeanor. After the arrest she was transferred to the Van Nuys jail for booking. At around 10:30 am she was released. Pratt came from Heidi Montag’s birthday party
at Empire, a Los Angeles nightclub. Holly’s a former participant of I’m a Celebrity…Get Me Out of Here!

Pratt is currently on the fifth season of The Hills which airs on MTV at 10 pm. Pratt has mentioned that she’s not sure how
much more reality television filming she can handle.

The sister of Spencer Pratt has also been in the public eye recently for her battle with bulimia. You may recall Heidi and Spencer’s fam and friends weighing in on whether or not the couple
should have a baby.

Spencer has indicated earlier this month that he refused sex with his wife who wants to get pregnant and picked a new home because it’s not “kid-proof.” Heidi described it as a
bachelor pad which left sister Stephanie to say the couple is “immature.”

Madonna sued for being Madonna

Leona Lewis is punched at a book signing in London