These were the hottest entertainment news stories for the week ending October 16, 2009. 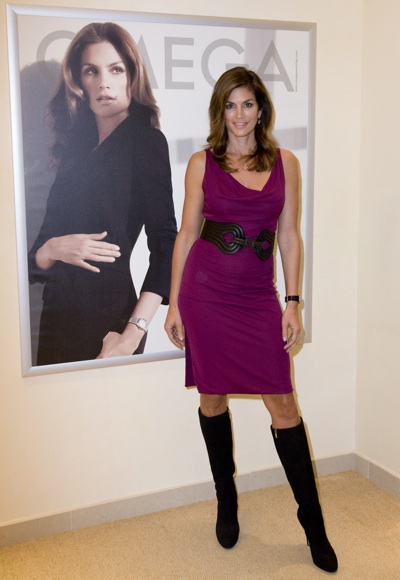 Cindy Crawford brightens up autumn in this of-the-moments purple cowl neck dress, accessorized with a waist-cinching black leather belt and knee high boots. She also happens to be sporting one of
her new Omega watches on her wrist — she just debuted a line with her name on it.

Jon Gosselin has to pay up

Dirtbag dad of the year Jon Gosselin was ordered to repay $180,000 to a marital bank account after he ripped off the mother of his eight
kids, leaving Kate with only $1000 to pay the family’s bills. Did he really think Kate of all people would let him get away with that? Let’s hope he hasn’t already spent it on Ed Hardy tee-shirts
and Axe body spray.

Heidi Klum has a girl

Supermodel Heidi Klum and hubby Seal welcomed another girl into the world. Heidi immediately weighed 90 pounds of perfect flesh after the
birth and has never even heard of cellulite or stretch marks.

Leona Lewis gets punched at a book signing

You know, if you don’t like someone’s CD, just sell it on eBay. No need to punch the artist. Apparently a crazed “fan” of Leona Lewis thought violence was the answer to being subjected to the song
Bleeding Love 80 times a day for the last two years and took it out on the poor girl’s face. No worries; Leona is okay but shaken.