Susan Boyle appears less crazy and more thrilled on the cover of her new album, I Dreamed a Dream. 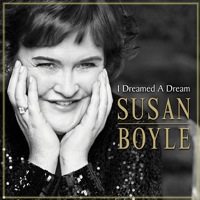 The Britain’s Got Talent sensation is keeping it
real on the cover, appearing in all her wrinkled glory — no airbrushing or makeover for Boyle.

But Boyle’s look has little to do with the current success of the album, which isn’t due for release until November 23. The CD has already
topped the Amazon bestsellers list due to tens of thousands of pre-orders. At this rate, Boyle is sure to hit the top of the Billboard charts!

I Dreamed A Dream

Cry Me A River

How Great Thou Art

Up To The Mountain

Who I Was Born To Be

The End Of The World

Want to get your hands on a copy? Join the other fans and preorder! Until then, check out Boyle singing Wild Horses
on America’s Got Talent.

Michael Jackson’s new single, This is It

Samantha gets Carefree with SheKnows