Are Jennifer Aniston and John Mayer back to making sweet, sweet music together? 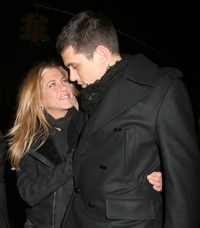 Maybe the better question is, is Jennifer Aniston certifiably
insane?

A couple of sources told a couple of gossip rags they spotted Jen and John getting cozy at the Bowery Hotel in New York City last month. One said, “Jen was there on the arm of John and they were
all very lovey. She was in casual clothing as was he, and she seemed very comfortable around his crowd of friends.”

A source closer to John Mayer is passing it off as friends with benefits. “They are very close. They remain great
friends. He thinks she’s amazing, nice and smart, and he has nothing but respect for her.”

Here’s the thing. Jennifer Aniston is a smart, beautiful woman who I’m sure has no problem finding companionship when she’s so inclined. So
why do we keep hearing about this seeming obsession with John Mayer, when he’s treated her so shabbily?

We’ve been hearing for years he’s got a secret of epic proportions. In his pants.

And as far as John goes, he’s got a new album to promote. Gotta get that Google ranking up!