Vampire Diaries is quickly becoming the fall seasons must-watch hit. Secrets are going to be revealed on tonight’s episodeâ€¦or will they?

When we last caught up with our Vampire Diaries friends, Elena was confronting Stefan about her belief that he is a vampire. 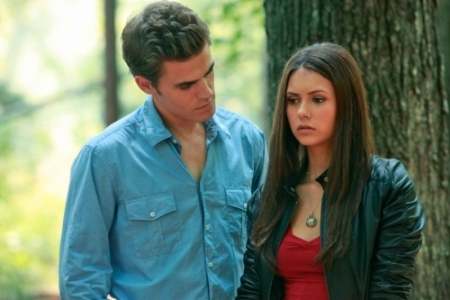 Just as her demands for the truth from him began, the screen went black and now we’re here on another Thursday finally awaiting answers to questions spawned by last week’s
Diaries.

The Salvatore past is explained, promises the CW, as Stefan delves into his family’s vampire past to Elena.

Through flashbacks, The Vampire Diaries takes audiences through the landscape of the family Salvatore sordid history of death and
destruction.

Perhaps this is a great opportunity for Stefan to also explain how he’s different and has pledged to live his days as a non-human eating vampire.

Meanwhile, Stefan, who may have the best of motives, is still dealing with the escape of his venomous brother Damon who has taken control of Vicki’s future. Vicki’s strong –
don’t bet she won’t find a way to get away!

As the unexplained mysteries have exploded in the tranquil town of Mystic Falls, a group of “good guys” has emerged led by Mayor Lockwood and Sheriff Forbes.

In tonight’s episode, their group will inch closer to solving the riddle of how and why vampires have returned to their small town.

The top 10 TV characters of the decade