Leona Lewis was attacked by a crazed fan at a London book signing. 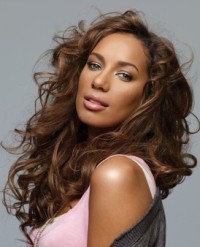 The 2006 X Factor winner had been signing copies of her new autobiography Dreams for
about 90 minutes when a fan, who had been waiting in line, punched her in the face — then laughed as the cops pulled him away.

A witness said, “She was running out with her hand over her eye and I just saw a man on the floor.”

“Suddenly the security all jumped on him and they were trying to pull him out and he was just laughing, he thought it was funny.”

Waterstones book store said in a statement, “There was an incident at our Leona Lewis signing this afternoon and the event was immediately
stopped.

“We are now doing everything we can to support the police in their enquiries.”

A spokesperson for Lewis told media the singer is medically fine, but needs a break after the incident and pulled out of a planned appearance on the BBC’s The One Show. “The police were
called immediately and medical attention has been sought.”

“Leona’s understandably badly shaken and apologizes to the fans she was unable to meet and complete signings for.”