Michael Jackson’s efforts to protect his kids from the press were infamous. Now, A&E may feature them in a new reality series and its breaking apart the Jackson clan. 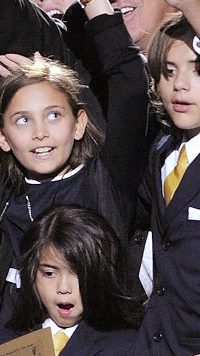 Most of us had never seen the young
Jackson three, Prince, 12, Paris, 11, and Blanket, 7, before the funeral for their father.

Michael was famous for hiding their identities, going so far as to cover them when they hit the streets.

Now, A&E is set to release The Jacksons: A Family Dynasty this December and yes, it’s a reality show about the entire clan!

The upcoming series promises footage of 23 Jacksons, but there’s much hubbub about whether the kids will be involved.

Airing as five one-hour episodes or 10 half-hour episodes, the new series will reflect a family in mourning and while US Mag reports that “the family shines on the series,” we all know MJ
wouldn’t care.

Word is his big sis Rebbie, 59, is horrified by the move to involved the kids for this very reason, while little sister Janet, 43, and Jackson matriarch Katherine, who are both involved, aren’t raising a fuss.

This story hasn’t been corroborated by the Jackson family, but executive producer Jodi Gomes was quoted, suggesting that The Jacksons:
A Family Dynasty series does exist.

There’s no doubt folks will tune in to get to know Prince, Paris and Blanket, but SheKnows hopes A&E respects a father’s very clear wishes and keeps them out of the picture.

For all your reality TV news, never miss a day of Reality TV Magazine.

Michael Jackson’s newest single This is It