Gilles Marini stole America’s heart on Dancing With the Stars, and now he’s stolen Sarah’s on Brothers and Sisters. 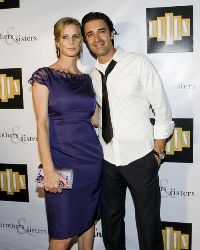 Marini’s
story arc begins with the hit show’s October 18 episode. He phoned SheKnows to discuss (exclusively with us!) what it means to be a Frenchman adored by tens of millions of Americans. His
passion for America is beyond compare — he now resides in California with his wife, Carole, son Georges and daughter Juliana.

SheKnows: Thanks for visiting with SheKnows.

Gilles Marini: Thanks for having me — are you kidding me?

SheKnows: First of all, your experience with Brothers and Sisters. Did you have any expectations going into the show playing Luc Laurent?

Gilles Marini: When I was doing Dancing with the Stars, I got a call from my manager that the people from Brothers and Sisters would like to meet me for a
guest-starring role. I thought, “This is great. I would love to go there.” I met Ken Olin and some of the writers and producers, and we had a long conversation. Next thing I knew, they offered me a
part on the show. I realized it was one of the best shows on TV, so it was a kind of “Oh, my God. How is this going to work out?” Now, here I am, and everything is going really well.

SheKnows: Well, it’s hard when you show up as a new player on a show with a set cast that has been working together for years. 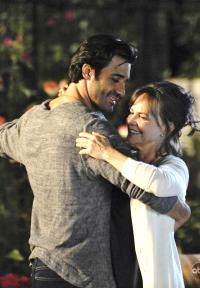 Gilles Marini: It’s like coming into a family, you know? [They’re] a family on the screen.
Pretty much, they are a real family in life, too. They are all really close. They accepted me and welcomed me better than I ever imagined. I started by sitting down next to Dave Annable, who gave
me a big hug. Imagine sitting next to Sally Field and Rob Lowe… you’re kind of freaking out. You’ve been watching those people and admiring their work for a long time. Now, it
was like I was home. They opened their arms. You know, I’m a non-threatening guy. I have no agenda. I’m always myself, and I love people. I came into the show to really do my job and
respect everyone. There’s no ego when it comes to me at all.

SheKnows: I can tell that by watching Dancing with the Stars. One thing that also struck me is your work ethic. You’re willing to go 300 extra miles to get something
right. Where did that arise from?

Gilles Marini: I don’t understand anything else. Since I was a child I have been working. It is a normal thing to do. I come every day to the set, and I know all my lines.
You can never be completely ready, never for a shoot for a show; emotions come into play, director’s ideas, but you need to be ready. I’m ready every day. I think it’s normal.
I’m thousands of miles away from where I’m from. I came here with nothing. For me, it’s normal to be a little bit more ready than anybody else who lives here and belongs here. I
have to prove that I’m part of this and deserve to be here.

SheKnows: Your family, very visible at your side during Dancing with the Stars, is another aspect of your personal story that made America fell in love.

Gilles Marini: I have to support that family. We are all going to die one day, and I want to be remembered as a good person. It has to include every element. When I’m on
Brothers and Sisters, I feel this is my element. These are the people I should play with.

SheKnows: For you personally, what has this been like on your end? America has truly embraced you…

Gilles Marini: That’s where I become really emotional, Joel. The day I landed in Miami and I started this adventure here, there was never one obstacle. All my life in France
was land mines. From A to Z, from where I grew up to where I worked, to my family, it was very difficult. As soon as I landed here, my luck turned. Everybody I met was embracing and welcoming me. 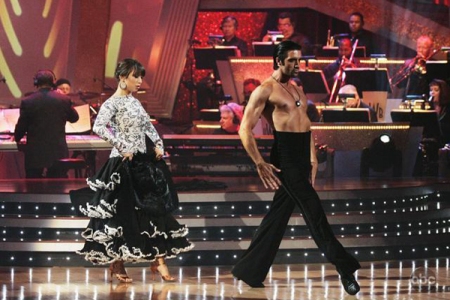 Gilles Marini: (Continuing) It is very natural for me to have nothing to say bad about this country at all. I’ve always been a very big advocate of America. I love
this country with all my heart. I want to be nowhere else. I felt it really strongly while I was on Dancing with the Stars. The show made you believe that everyone votes, and all that, but
I felt it in my heart, by the thousands of emails I received every day — it was overwhelming. They were like, “You are part of us now.’ I felt this is my completion. This is my Oscar,
really. That America opened its arms to me and accepted me here. It’s my Oscar.

SheKnows: That’s the nature of Dancing with the Stars: You have millions of people who have to pick up the phone and vote for you. It’s a very active process.

Gilles Marini: For me, it was like, “Oh my God. I’m still here!” The truth is, in the end, when it was against Shawn Johnston, I thought, “Please don’t let me win.” You
can read my lips. I felt that I was against a real American hero. Someone who proved to her country that she did her duty. She’s proud, proud of this country. I did not want to win. I thought
it would be a bad thing for me. There must be a God somewhere, because it happened.

Gilles Marini: I was so excited for her that she won. Every time I see her, I’m so happy for her. Every time she goes home, she sees that trophy.