Heidi Klum, supermodel, star and executive producer of Project Runway, has given birth to a daughter, Lou Sulola Samuel. 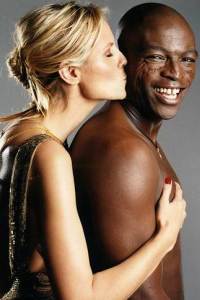 Heidi gave birth to another daughter though there are conflicting reports about the time of the birth.
Some outlets are saying it’s 1 am October 9, but in any event, baby Lou arrived into this world as a healthy baby.

Seal issued a statement yesterday which indicated, “It’s difficult to imagine loving another child as much as you love your existing children. Anyone who has a family will tell you this.
Where will one find that extra love? If you love your existing children with all of your heart, how then can one possibly find more heart with which to love another?”

His statement indicates the baby, Lou Sulola Samuel was born on Friday at 7:46 pm. “From the moment she looked into both of our eyes, it was endless love at first sight. She is beautiful
beyond words and we are happy that she chose us to watch her grow over the coming years.”

Since the time of the birth was confirmed by Seal, one thing that remains a mystery is the location. Industry insiders are suspecting Heidi Klum gave birth in New York which would not be a surprise
since it was New York City where he leaked her pregnancy to the outside world.

At a concert in April, Seal announced to the audience that Klum was pregnant and one month later they released the news they were going to
have a girl. Lou joins big siblings Leni, 5, Henry, 4, and Johan, 2 and-a-half.

Don’t miss our exclusive interview with Seal where he discusses Heidi and his family.

What is K-Fed doing with Britney Spears’ kids?

Funnyman Will Ferrell to be a dad again