Kourtney Kardashian , the co-star of Kourtney and Khloe Take Miami, is expecting a boy around Christmas. 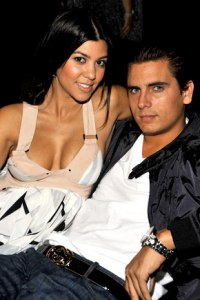 Kourtney is expecting a boy
and told E! News that he’ll be a much needed addition to the Kardashian clan. “A boy is definitely needed in this family!”

Kourtney is engaged to Scott Disick, the baby papa, and added they’re “thrilled to add a little boy to the bunch.”

Considering the ratio with sisters Khloe, Kim, half-sisters Kylie and Kendall and mom, Kris, the only other men in the household are her brother Robert Kardashian, Jr and step-dad Bruce Jenner.

Of course, now that the sex of her child has been revealed, Kourtney is planning on painting the nursery blue.

Now that Kim has reunited with her boyfriend, New Orleans Saints player Reggie Bush, it sounds like they spent a whole week together prior to his return to New Orleans as she walked the red carpet
for the Hollywood Style Awards red carpet event. She presented the Style Original award to Kelly Osbourne and also she herself won the Style Siren award.

Kim’s been glamming it up old Hollywood style and noted, ‘You have to step it up when you are getting a style award.”