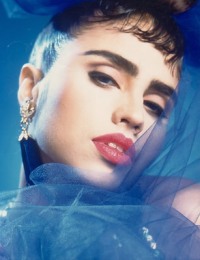 According to Latin hip hop singer,
Safire, it was her song and he recorded it in 1990.

Her song was called I Never Heard and has the same melody and lyrics as Jackson’s new single. Safire mentioned on her website and in a blog that the song was written specifically for
her by Paul Anka and yes…Michael Jackson himself!

It this is a coincidence?

In her MySpace page Safire wrote, “Michael touched my heart and soul in so many different ways I feel blessed that I had the chance of recording an original song he wrote for me with Paul
Anka titled, I Never Heard.”

Interestingly enough, Sony Music Entertainment released the song and proclaimed it was a brand new song. Both songs, This is It and I Never Heard, have extremely similar lyrics
and melodies.

Although the Sony chairman Rob Stringer told The New York Times that he did not know the origins of the song, fans of both entertainers may note the extreme similarities.

According to the record label, after the King of Pop’s death they found a demo tape which Michael Jackson recorded. Since the tape had MJ accompanied by a piano, producers added some vocals
from his brothers and music from an orchestra to round out the song.

This is all in an effort to promote the Sony movie — Michael Jackson’s This is It. A soundtrack including two discs will include two versions of the song and will be released on
October 27.

Michael Jackson’s This is It

Samantha gets Carefree with SheKnows