The Proposal, starring Sandra Bullock and Ryan Reynolds, lands on DVD and Blu-ray October 13. The romantic comedy hit marked the return of Bullock to the genre and also launched Reynolds to the A-list.

In the following clips from The Proposal, SheKnows gets inside the film that is equally funny as it is romantic. Seriously, the story of a boss who makes her assistant marry her in order
to keep his job and her citizenship, The Proposal is one of the year’s best romantic comedies. Perhaps, one could even call it timely given the David Letterman situation. 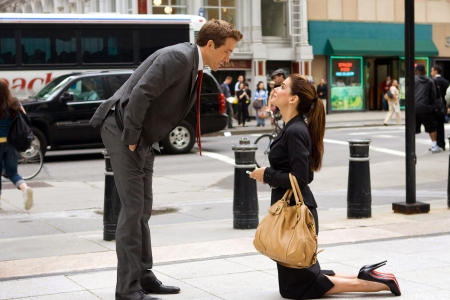 The big news on The Proposal’s arrival on home video is the addition of the DVD and Blu-ray bonus featured alternative ending.

Rarely does a film’s alternative ending live up to what we saw in theaters, and in The Proposal the results are worthy of a look — either method of achieving closure on the
film works.

The Proposal scene: We’re getting married!

The Proposal arrives in two forms for home video, the two-disc DVD set and the single disc Blu-ray. Each contain a digital copy — which seems to be becoming standard. 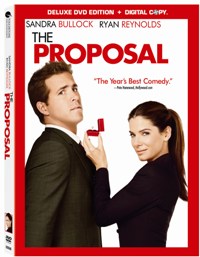 Bonus features on The Proposal
home video arrival include:

The Proposal: what it’s about

The duo head off to Alaska and hilarity ensues. SheKnows wishes for a little more of the Bullock-Reynolds pairing in the corporate America world, but their comic chemistry is still top notch
navigating his family and the wilds of Alaska.