The Simpsons have found an interesting means of marking 20 years of broadcast. The matriarch of the Simpsons clan, Marge Simpson, will be gracing Playboy magazine’s November cover.

If life imitates art imitates life, since Hugh Hefner has already been on The Simpsons, it is no surprise Marge will pose for Playboy. 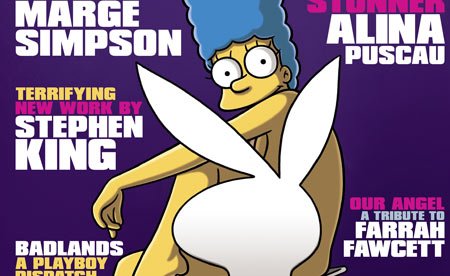 For the first time in its illustrious history spanning the likes of pin-ups such as Marilyn Monroe and Cindy Crawford, a cartoon character will grace the cover of Playboy magazine.

Yes, that’s right. Marge Simpson has “posed” for the skin mag and will apparently have a data sheet, interview and yes, a two-page centerfold (gasp). The issue will hit newsstands on October 16th and although it has not been revealed how much skin Marge Simpson will actually reveal in the November issue, apparently it gets very “racy.”

Whether or not the mama lets her blue hair down is a whole other story but the decision to put Marge Simpson on its cover is a tactful one at that. Playboy’s circulation has decreased from 3.15 million to 2.6 million the past three years so by putting Ms Simpson on the cover they appeal towards a younger demographic while not alienating an older one.

As Marge sits on a chair in the shape of the Playboy bunny, this particular issue hitting newsstands will likely be a collectible.