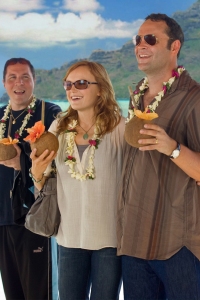 That’s OK. Films can have a shelf-life that is as limited to the time leaving the theater.

Couples Retreat, going in, audiences are keenly aware, is not going to be one of the best comedies of all-time. But, with that being said, Couples Retreat is as thoroughly
enjoyable as the film’s Bora Bora setting is beautiful.

Couples Retreat is written by Jon Favreau, Vince Vaughn and Dana Fox and in the hands of a former
child star director, Peter Billingsley (A Christmas Story), the film is an enjoyable getaway. Vaughn and Favreau are a great team together onscreen and off screen their prose also
oozes with chemistry.

After several interviews with the cast, we knew the script was solid, but improv was also used to capture the hilarity of four couples trying to find their way in their relationships.

Knowing that fact, SheKnows would love to see the shooting script to see where the film varied. Favreau wrote much of the script before passing it on to Vaughn as Favreau went to work directing Iron Man. There is no noticeable difference of who wrote what, but what is noticeable is how once
settled into the island, Couples Retreat runs out of steam after an hour.

Many comedies — numerous hit comedies, in fact — are guilty of this charge. The issue with the comedy film is many should have run the credits at minute 60 before the storyline gets
dragged out and the humor runs dry.

Couples Retreat does not fall on that sword too badly because of the strength of the characters as embodied by this top notch cast. As the comedy film heads into its third act, the
emotional aspects of the character’s relationships take over sending the funny — for now — beneath the surface. In Retreat, that 20 to 30 minute interlude of soul searching towards
the end of the film does not feel painful as can in so many of this genre. But, it is still present. 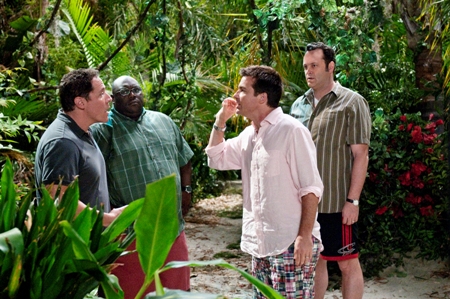 Stealing the film from the usually comically classic Vaughn is Jason Bateman. His uptight suburban husband and father is at the root of the Couples Retreat. He and his wife, played with
comic sass by Kristen Bell, have decided their friends need to join them on a Couples Retreat in paradise to help them save their marriage.

The others go along believing the journey to be jet skis and daiquiris. But, that would not be so funny, would it? Instead, each couple embarks on a discovery of “relationship
building.” It is during these sessions that the comedy truly shines in Couples Retreat. The clips in the trailers only scratch the surface of the fall-out-of-your-chair moments
throughout.

One of our favorite French actors, Jean Reno, is perfectly cast as the “leader” of the island whose Zen-like approach to couples therapy in paradise is not for discussion. The rules are
followed or you go home.

Vaughn and Favreau, in particular, use this barrier to their fun as a comic minefield. 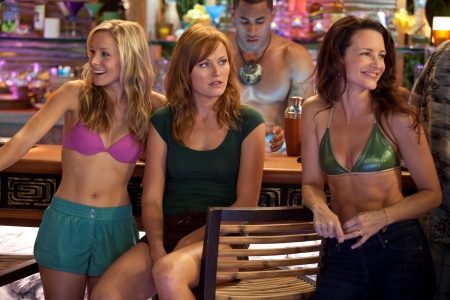 And the actresses are no slouches either. Bell, as mentioned, is cute in her comic way and Kristin Davis does a version of Charlotte from Sex and the City as Favreau’s wife —
but it is the arrival of Malin Akerman as Vaughn’s wife that sets her above the other talented actresses in Couples Retreat.

It takes a special performer to be able to handle the comic volley that comes from Vince Vaughn. Reese Witherspoon
achieved that goal in Four Christmases and Akerman does the Oscar-winner one better in Couples Retreat.

In the end, audiences will leave Couples Retreat pleased. But, as many trips to paradise tend to do, as the days go by the memories of the trip will fade and all will be remembered is that
is was fun.