Gosselin twin girls celebrate their ninth birthday and how were Kate and Jon? Kate turned comedienne for The Jay Leno Show soon after and might think about a career as a comic actress. 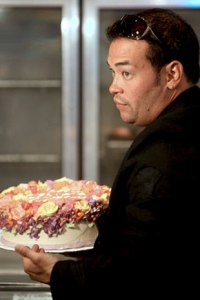 “Marcia, Marcia, Marcia!” yelped the cries from Jan Brady. If you recall the middle child syndrome on The Brady
Bunch, you’re not alone. One can only wonder if the nine year-old Gosselin twins feel left out of the limelight as their parents are in the spotlight regarding their bitter divorce and
most of the attention around the Plus 8 is surrounded by their six siblings.

But alas, they’re celebrating their ninth birthday today as Jon has mentioned Kate will attempt to limit his time with his twins, Mady and Cara.

Although some may view Kate Gosselin as controlling on air, she appeared in a sketch last night on The Jay Leno Show to spoof the TMZ.com television show. In the skit, Gosselin is
surrounded by paparazzi which is not much different than her real life. As she unloads groceries into her car in a parking lot, she apparently told the photographers to leave her alone “and
stop taking pictures.”

In the skit, of course they continue to snap away to which she retorts, “Hey! What did Mommy just say? I asked you to stop taking pictures and you continued. Don’t talk back to your
mother!”

Apparently this resulted in one photographer sitting in his car while another was scolded for having breakfast food leftovers literally stuck on his face. You can guess what happened next: Kate licked her hand and wiped around his mouth. As Kate has faced intense scrutiny, along with Jon in the tabloids and headlines, from the looks
of the skit she’s attempting to keep her spirits up and sense of humor intact.

Is Jon Gosselin stealing money from his kids?