One can only wonder if Twitter jumped the shark when Oprah learned how to tweet several months ago on her show and Ashton Kutcher reached one million followers. Among the list of celebrities who
will tweet no more is Hannah Montana star, Miley Cyrus. 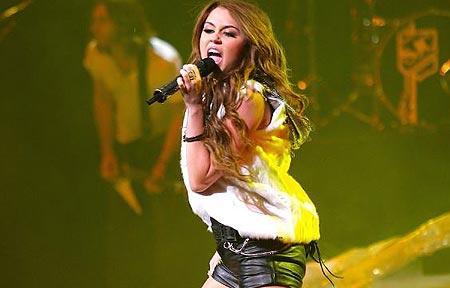 In fact, Miley tweeted that her rumored boyfriend, Liam Hemsworth may have influenced her to quit since he wasn’t exactly on board
with the micro-blogging site. Apparently he wanted her to delete her account “with good reason.” As for this morning, her entire account was disabled as was her mother’s.

Some fans may feel like they were left in a lurch since the star had more than 1.1 million followers on the site. Although her representatives haven’t issued a formal statement, fans are
organizing a revolt under the category of “mileycomeback.”

Although Miley’s fan base tends to be the ‘tween and teenage crowd, Sex and the City fans may be surprised to know she’s rumored to be a young Carrie Bradshaw in the
Sex and the City sequel, to be in theaters May 2010. Aside from making headlines about Twitter, the starlet has recently finished filming The Last Song, a film scheduled to open in 2010.

Miley will star in the drama which focuses on a rebellious girl. She’s sent to a beach town in the south for an entire summer to stay with her father. It’s no surprise that music plays
a pivotal role as the estranged duo connects through tunes.

Miley Cyrus wants a Sex and the City for teens