Amanda Tapping played the character of Samantha Carter for 10 years of Stargate SG-1 and put in more time as “Sam” on both Stargate Atlantis and the series’ offshoot movies. And while the Stargate will never be far away, it’s her new show — Sanctuary, on the SyFy network — that’s getting most of her love right now. In honor of that show’s second season starting this Friday, October 9, let’s take a little look back at where Amanda has been.

We talked to Ms Tapping all about her roles as both star and executive producer of Sanctuary in part one of our interview, but here, the actress tells us more about Stargate — past, present, and future. 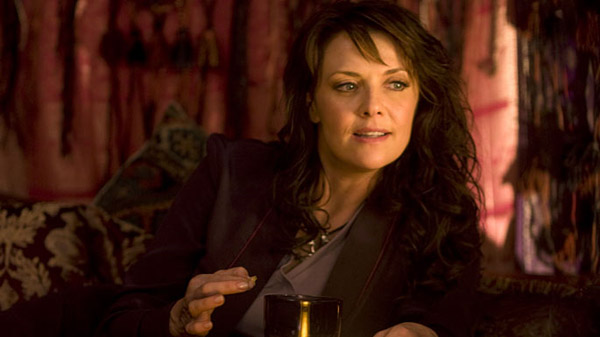 A trip to Atlantis

SheKnows: Could we touch a little on your time on Stargate Atlantis — which was going on while you were planning Sanctuary?

Amanda Tapping: Yeah, I actually shot the webisode for Sanctuary before… that was in January 2007 — and I started my first season, which was season four of Atlantis, that February.

SheKnows: So you knew it wasn’t going to be a one season deal if Sanctuary took off — or what was sort of the plan there?

My commitment on Atlantis was for the full season, but it was only for a certain number of days per episode. So if Sanctuary were to continue in the way it was going, there was still a possibility to make it work. It wasn’t in competition with Stargate Atlantis, because it was only on the web at the time we could produce it.

SheKnows: How did you like working on the show — especially compared to what you’re doing now and SG-1?

Amanda Tapping: It was interesting. It was very different. I love the cast of Atlantis and I’ve known them for a long time — but I was very cautious about not stepping on anyone’s toes about the fact that it wasn’t “my” show. I treated myself more like a guest star than a regular when I first got there, because it’s their show. I mean you’re bringing in this other character from a show [Stargate SG-1] that’s been on for ten years, well-established, and I didn’t want anyone to feel threatened by that. I didn’t want them to feel I was coming in to take over — I was just coming to do whatever I could on what I already thought was a great show.

SheKnows: And that sense of being an outsider was sort of reflective of the actual situation, too.

Amanda Tapping: Absolutely. That was the thing for [her SG-1 & Atlantis character] Carter — it was really interesting, because the relationship that she had with her crewmates on Atlantis was not dissimilar to how I felt going in. Carter went in saying, “I am going to defer to the expertise of the people on this base, and that’s how I’m going to chose to move this machine, by respecting the people around me and by listening to what they have to say,” and that’s how I went in, too.

SheKnows: Right, you played it very differently. On Atlantis, Carter seemed much more stressed, not as exuberant as on SG-1… I’m curious about the combination of actor versus character.

Amanda Tapping: I think it’s partly the writing as well. I talked to Joe and Paul about the fact that I didn’t want to go in kicking ass and busting balls — which would be Carter’s bent, I think, in a subordinate situation — but as a leader I think she said, “Okay, well this is the first time I’ve ever had a real command. I don’t want to screw it up,” and “How would I be the most effective leader in a place that I’ve never been before?” So that’s how I approached it with Joe [Mallozzi] and Paul [Mullie].

I wish we had done a bit more with her — gotten back to a bit more original Carter by the end of the first season than we did. But I think that the fact that there were twenty episodes, with all these characters: How do you know how to serve each one and still tell the story, still serve the fans and still serve the show?

I had some great stuff — “Trio” for example — such a great episode for Carter and McKay and Keller, and we had so much fun shooting it. They gave me great stuff, so I think had I stayed for another season, then you would have seen a different version of Carter in command. I think she would have gotten her balls back. (laughs)

Stepping back through the Stargate

SheKnows: Are there plans for you to work on any more Stargate stuff? 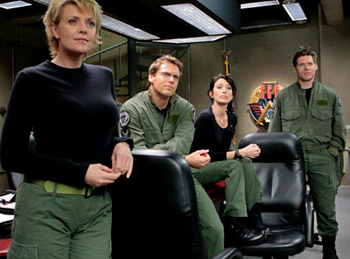 I’m not signed on as of yet but, I’ve been asked about my availability for both the SG-1 and Atlantis movies so, and I said unequivocally I will always make myself available for Stargate. [Note: Amanda has since signed on for an as-yet untitled SG-1 movie, which will be the third such feature after Ark of Truth and Continuum.]

SheKnows: That’s great — I know all the fans will probably appreciate that, too.

Amanda Tapping: Yeah, well, it’s family, you know what I mean? We owe a lot to our fans, and I’m very respectful of the fact that the fans have been so supportive, and so many of them have been so supportive of this new project. But I still get a lot of, “You don’t look like Sam Carter anymore, what the hell were you thinking,” with the hair and the accent.

SheKnows: But that’s the point.

Amanda Tapping: Yeah — that’s exactly the point. But the fact of the matter is you can always go home, and as I said to Brad Wright, and to Rob Cooper and to Joe, “Whatever you guys need, of course I’m there,” because they gave me so much — and I’m hugely grateful for the opportunities that Stargate has afforded.

Be sure to check out part 1 of our interview as Amanda Tapping talks Sanctuary!