Inside the new Grey’s Anatomy and Private Practice tonight! 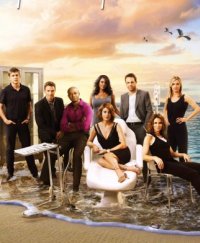 It’s time for ABC’s Thursday
night duo of drama, and we’ve got the scoop on what to expect on Grey’s Anatomy and Private Practice.

At Seattle Grace Hospital, Meredith and Lexie are distracted by the return of their father, Thatcher. The good news is, he’s not drunk. The bad news? His liver is giving out, which leaves Meredith
fighting to save her father’s life.

Cristina finds herself on an unusual surgery after McSteamy gets fed up with her uber competitive nature, and after a bear scare at the trailer, Alex tries to talk Izzie into moving back in with
Meredith. Iz isn’t hearing it. Set on moving forward, she bonds with a cancer patient, sharing her insider secrets on getting the best care.

Private Practice finds Violet less ready to move on. On the mend physically, she’s still traumatized by the attack that almost killed her and her baby. Pete’s camped out with her, but we
still don’t know who the baby Daddy is.

Meanwhile, at the office, Sam is anxious to fill the vacancy left by Naomi, who’s now working for the competition. Sam and Addison agree to embrace denial as their coping mechanism during
this time of change, but that method isn’t going well for Coop and Charlotte, who are drowning in their own denial.

Tune in tonight to see what goes down.


Read on for more TV

The primetime soap makes a comeback