An Education, the Sundance coming of age hit, premieres in Los Angeles and New York this weekend before going nationally later in October and SheKnows has your first look. 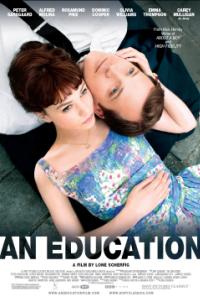 Brilliant and bored at
16, Jenny is well on her way to getting into Oxford when a handsome fork in road offers her an entirely new education.

Jenny’s world of homework and cello quickly gives way to the smoky night clubs, art auctions, shopping trips and culture of 1960’s London, all thanks to the attention of playboy David (Peter
Sarsgaard), who is not only 30-something and wealthy, but also Jewish.

Already more mature and witty than most of the adults she meets, Jenny quickly blossoms into a swan. She even decides to embraces the life David offers, only to learn one of the toughest coming of
age lessons out there: The more you know, the less you know.

An Education is inspired by the memoirs of British journalist Lynn Barber, which were just published in full last June, the story was adapted for film by About a Boy and
Fever Pitch writer Nick Hornby.

SheKnows didn’t get to screen the entire film, but snuck a peak at a handful of clips and we are completely sucked in, Carey Mulligan, who plays Jenny, is one to watch for certain, while Sarsgaard
is dangerously charming and Alfred Molina and Emma Thompson appear as fantastic as ever.

An Official Selection at the 2009 Sundance Film Festival, An Education walked away with the Audience Award and Cinematography Award.

Check out the trailer to see what all the fuss is about.

Inside Where the Wild Things Are