Kevin Federline is on the verge of being sued by his former landlord for trashing his old house. 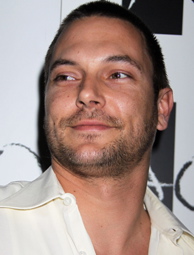 The Tarzana, CA home was left in deplorable condition when
K-Fed took off without paying his last six months rent last May. The owners say Federline owes them $110,661 in unpaid rent and damages including:

Photos of the home also show sharp broken shards of tile and pottery in the kids’ play area, trash thrown around the entire back yard and garage and lots of toys and other belongings left behind.

Federline spent the summer touring with his ex-wife Britney Spears being paid to watch his own kids, a job millions of fathers do for free
every day. Living high on the hog on Britney’ money since their divorce has gone straight to his gut, and the fatty is rumored to be a
contestant on the net season of Celebrity Fit Club.

And yes, that is a cigarette he is waving around his child in the photo at right. Stay klassy, Kevin.