The recent Penelope Cruz-Javier Bardem engagement news is another case of “sources say,” and don’t expect confirmation from the “couple.” 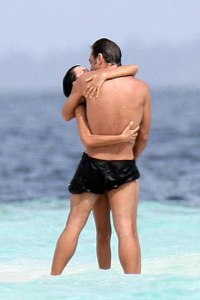 “I don’t talk about that,” Cruz said of her romantic life back in 2007. “He’s a friend and the best actor in the world.”

Staying tight lipped is how Cruz and Bardem have kept their romance under cover from the start, assuming it exists. They don’t work the red carpets together or babble about each other to the press
and are rarely photographed together.

The engagement news makes sense to many, as the paparazzi have been on baby bump alert since August, when it was reported Cruz was already four months along.

The actress, however, continues to deny she’s pregnant and publicists didn’t comment on a recent shot of her and Bardem leaving an OB/GYN clinic in Madrid.

In spite of those denials, NY Daily News’ Rush and Malloy were quite confident in breaking the new news that the top secret couple with a secret baby on the way is also secretly engaged.

The story concedes that the couple is “playing coy,” but also insisted, “Take it from us, they are in fact engaged.”

They offer a quote from a friend who heard first hand from Bardem or Cruz, and also report that the couple fell for each other back on the set of Jamon, Jamon, contradicting the lore that has
they’ve been together for only two years.

US Weekly chimed in, backing the engagement with a source that says, “They tried to keep it very private and quiet.”

Nice try. Or was it? After all, we don’t even know what’s true here…

SheKnows is sending the pair congrats, just to be safe!

Don’t miss our interview with the now-engaged superstar, Penelope Cruz.

Read on for more celebrities in love

Justin Timberlake and Jessica Biel: where is the truth?

Will Ferrell’s going to be a dad again!