Tyler Perry detailed his horrific childhood abuse in a letter to fans on his website. 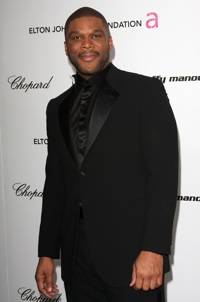 Perry’s normally funny schtick took a turn for the serious when he posted a letter to fans on his website revealing a horrific childhood filled with physical,
emotional and sexual abuse.

The talented comic says the childhood memories came flooding back after a screening of the movie Precious, which he executive produced with Oprah Winfrey.

Perry recounted a long list of abuses at the hands of his father, grandmother and other adults.

“My father came home, mad at the world,” he wrote. “He was drunk, as he was most of the time. He got the vacuum cleaner extension cord and trapped me in a room and beat me until the skin was coming
off my back.”

Perry says at the age of ten he was seduced by a friend’s mother, who locked her own son in the bathroom and wouldn’t let Perry leave the locked apartment until he gave in to her. He recounts, as
an adult, being hit up for cash to pay for the funeral of a man who molested him years earlier, and how he found out his own father was molesting a female friend — a discovery that set off another
long string of beatings, lasting until he was 19.

His grandmother, convinced that young Tyler’s asthma and allergies were nothing more than him being dirty, nearly killed him in a chemical bath. “She said she was going to kill these germs on me
once and for all,” he wrote. “She gave me a bath in ammonia.”

Seeing Precious made Perry realize he made it through his tortured childhood, despite the pain. “It hit me so hard, I sat there in tears realizing that somehow, by the grace of God, I made
it through,” he wrote. “My tears were tears of joy, being thankful that I made it.”

“I know that there are a lot of people out there with stories far worse than mine but you, too, can make it. To those of you who have, welcome to life. I celebrate you,” he said. “We’re all
PRECIOUS in His sight.”

Precious, based on the novel Push by Sapphire and featuring both Mo’Nique and Mariah Carey, is due for release in
November. The film is garnering Oscar buzz for both actresses.

Jon Gosselin accused of stealing money from his kids

Jessica Biel and Justin Timberlake: where is the truth in the breakup rumors?