When David Letterman revealed his blackmail tale last week, he maintained that would be the last he spoke of it, but Monday night he revealed he’d missed a key element: Letterman may be a victim of felony extortion, but he’s not the only victim in this story. 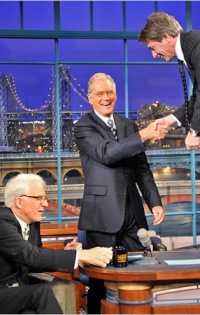 “If your behavior is
responsible for hurting people, that’s a separate part of the equation,” Letterman conceded on the
show last night. “And it did not occur to me last week, when I was discussing having had sex with women who worked on this show…that reporters, newspaper people, radio and TV would start
hounding the staff…

“It was very unpleasant and I would just like to set the record straight: No, I’m not having sex with these women. Those episodes are in the past, so my apologies to subjecting them to that
vulnerability and being browbeaten and humiliated.”

After lightening the mood a bit with a quick joke about sleeping with Late Night announcer Alan Kalter, Letterman continued to praise the support he’s received from his cast and then made
a much more personal apology to his wife, Regina Lasko.

“She has been horribly hurt by my behavior,” he admitted. “If you hurt a person and it’s your responsibility, you try to fix it. At that point there’s only two things that can happen: either you’re
going to make some progress and get it fixed; or you’re going to fall short and perhaps not get it fixed. Let me tell you folks, I got my work cut out for me.”

In spite of the personal and professional hurtles Letterman faces, he concluded, “Through all of the heartache and the attention and the embarrassment, I still feel I did the right thing.”

Out on $200,000 bail, 48 Hours Mystery producer Robert Joel Halderman pled Not Guilty to the charges of attempted first-degree grand larceny, but he could see as much as 15 years in prison if found guilty of the $2 million extortion
plot.No surprise, his attorney insists Letterman did more than step out in front of this story by talking on the show last week: He skewed the
story, misrepresenting the situation to paint Halderman the bad guy before he could defend himself, and apparently, Halderman’s not such a bad guy.

“I am surprised, mystified and stunned to hear these allegations against Halderman,” former CBS anchor Dan Rather told People magazine. “They are almost impossible to believe. He was always a solid
character, steady, reliable, and a good, swift writer.”

In the meantime, dirty diary details continue to trickle out about the affair between Halderman’s live-in girlfriend Stephanie Birkitt’s and Letterman, while today’s big news is the reveal that
former intern Holly Hester also had a run with Letterman.

“I was madly in love with him at the time,” TMZ quotes her as saying. “I would have married him. He was hilarious.”

SheKnows knows Letterman is funny, but we’re just not so sure about all this funny business: Sex with your young staffers isn’t cool, and either is cheating on your girlfriend!