Couples Retreat stars Jason Bateman and Kristen Bell portray a couple heading to therapy in paradise to save their marriage. In real life, Bateman and Bell could double as an old married couple with the way they bounce comic energy off each other. 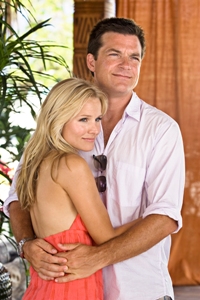 SheKnows: Both of you began in this business at a young age. Each of you are coming up on three decades, what have you taken away from your career thus far?

Jason Bateman: Yeah…I guess the thing I enjoy about being able to act every year is that my acting changes every year. I’ll look at something that I did even five
years ago, 10 years ago, and you can see how differently you would have played it if you had done it now. Hopefully, you become better, usually it is a little bit more subtle as you get older. Just
because we all change as we get older. We get it a little bit more. We don’t’ need to hammer it as much. Maybe in 10 years from now, I’ll be a better actor. And in 20 years,
I’ll be an even better actor. But, we’re all crossing our fingers.

SheKnows: Your character Jason is a little uptight. The bit about the PowerPoint presentations is captured perfectly. What do you find so appealing about playing a straight guy who
is inherently comic?

Jason Bateman: There’s nothing funny about a guy is relaxed and let everything roll off his back. So, discomfort and embarrassment and humiliation is funny. So if
you’re character is halfway there, it makes your job a little bit easier. Don’t have to act as hard.

SheKnows: Are you a PowerPoint fan to break down life’s nuances?

Jason Bateman: I haven’t gone that far, but I have a tendency to be long-winded and overly…

SheKnows: Whether Sarah Marshall or this film, there are certain parallels in your characters Kristen in that they are at the center of the comedy, yet there is heartbreak and
pain. …

Kristen Bell: I think you really don’t see how extreme their situation is, or how much it hurts them until three-fourths of the way through the movie when they have it out on
the beach. It’s a heartbreaking situation in and of itself and I think you can understand how a woman who is barely 30 and wants to conceive. That’s very difficult news and how she
might conceal that for perhaps three-fourths of a movie. And then, finally let it out. Their problem, although it might not be the most comedic part of the movie, is still very grounded and real.
Their infertility is not meant to be funny. But…(laughs).

SheKnows: Yeah, there are people out there who have had difficulty conceiving…

SheKnows: (Laughing) It comes down to taking the ordinary and making it extraordinary funny. 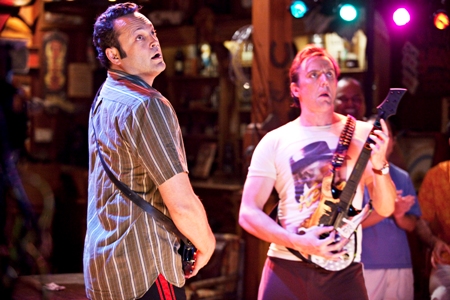 Kristen Bell: I think so — otherwise it would just be a silly spectacle. You want something that grabs you. You want a reason to pay attention. You would just, like Jason says,
you want characters that are semi-realistic, but just a little bit heightened. Because, there’s nothing funny about people that have everything…

SheKnows: Well, in Couples Retreat, I think it works…in that sense, did you know Jason prior to filming this movie? 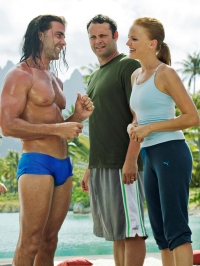 Jason Bateman: We
worked it all out, though.

Jason Bateman: We worked it out.

Kristen Bell: I had only known him for a few months prior to this film and not…

Jason Bateman: It was a fun start, wasn’t it?

Kristen Bell: I was lucky enough to be invited to Jason’s house one night for game night.

Jason Bateman: This is before that…

Jason Bateman: There’s a very hot kiss at the end of Sarah Marshall…

Kristen Bell: Sorry, every time I forget it.

Jason Bateman: She forgets it… 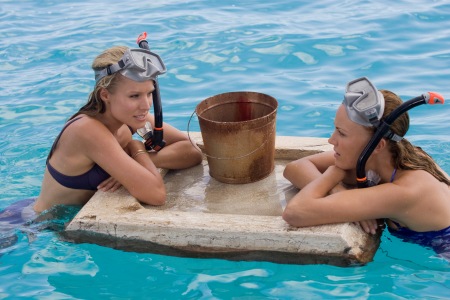 SheKnows: That could be construed as an insult Jason…

Kristen Bell: I think it was so much, so hot and heavy, it was like nothing I’ve ever experienced…

Jason Bateman: But, you and Dax made it through that so…

Kristen Bell: We did, and he’s very intimidated, to date, about that on camera kiss that we shared. At the end of Sarah Marshall, Jason Bateman…it’s Bateman,
right?

Kristen Bell: We did. We shared a lip lock in that. 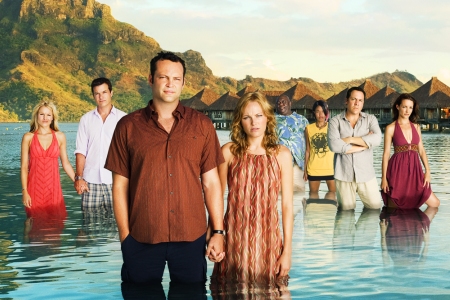 Jason Bateman: They weren’t really locked, were they?

Jason Bateman: You ate my mouth.

SheKnows: Yet knowing him, professionally, you had to be thrilled at the comic possibilities?

Kristen Bell: In all honestly, having known him a little bit before (turning to Bateman) plug your ears, I was very excited at the possibility of being in this movie and
him and I, I think he’s a pretty (pauses) decent actor — and alright comedian. I was excited.

SheKnows: We talked to Vince and Malin about the Yoga scene, how did you all film that without it taking months because of uncontrollable laughter?

Jason Bateman: It wasn’t just that scene. It was all the way through the movie.

Kristen Bell: It was…

Jason Bateman: It was tons of wasted money and film all over this movie. I’m interested to see what they put together on the DVD. There’s a lot of laughing.

Kristen Bell: There was a lot of laughing…

Jason Bateman: And Carlos in the yoga thing, when he started, sort of, powerful whispering ‘Boom…boom…’ when he started doing his little moves, that
wasn’t written. You have to warn someone when you’re about to do something like that.

Kristen Bell: Yeah, you can’t just boom them in a Speedo.

Jason Bateman: Yeah…you can’t not be expected not to laugh at that — unless you’re soulless or deaf.

SheKnows: Filming in Bora Bora had to be the most profound experience of your movie careers.

Kristen Bell: It was the biggest perk ever. I grew up in Detroit. I could not find Bora Bora on a map before we left. I have never dreamed that I would see a place like this.
Getting off the boat, the beauty was paralyzing.

Jason Bateman: See, they didn’t fly her out.

Kristen Bell: It was a six week boat ride

Jason Bateman: But, you got there on time.

Kristen Bell: The beauty is…aseptically it’s incomparable to anything I’ve ever seen before in a picture or real life. The water is bright blue, yet also crystal
clear, 50-feet down

Jason Bateman: It’s like we got a movie shot while we were on vacation.