The man suspected of video taping ESPN reporter Erin Andrews as she was naked in her hotel room is out on bond — but not before he apparently uploaded videos of other unsuspecting nude women to the Internet, as well. 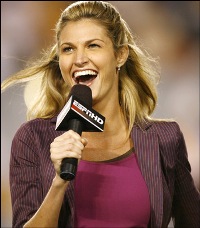 Michael D. Barrett, 47, was
released on a $4,500 bond today and was ordered to wear a monitoring bracelet on his ankle. He also was ordered to adhere to a strict curfew and not use the Internet. On October 23, he’ll
face federal charges of interstate stalking in US District Court.

Plus, he’s accused of trying to sell the videos to TMZ.

According to Assistant US Attorney Steven Grimes, Barrett continues to be a danger to Andrews and other women, as well. During the bond hearing, he told the
judge he’d taped other unsuspecting nude women and used his computer to distribute the videos.

You may recall Barrett’s disgusting crime: Shooting footage of the ESPN reporter through a hotel door’s peephole. The government has confiscated two computers and cell phones he has
used, and the assistant attorney has indicated that the confiscated items will provide additional evidence to a strong case.

Barrett apparently was not known as a pervert to people he knew; his attorney described him as having a good track record at work, where he sells insurance — or at least that’s what his
attorney is telling the judge and reporters. In addition, Barrett’s attorney indicated that information in the FBI affidavit does not describe the same Mike Barrett than any of his friends
know.

Marriott International, Inc. and Ramada Worldwide have issued statements saying they’re concerned about their guests’ privacy and safety. The video footage may have been shot on their
premises, and as such, the hotels are looking into privacy and safety issues.

Will Ferrell’s going to be a dad again!