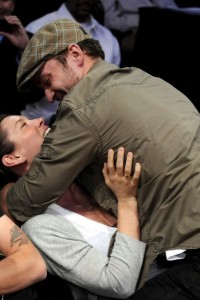 We can’t even keep it straight anymore! The hoopla started last week after Us Weekly reported that
Timberlake broke up with Jessica — over the phone! Ouch, right?

The net was soon overtaken with re-reports about what sources had to say: Jessica isn’t taking it well, while Timberlake has already moved on. Then, there were photos of JT’s much-hyped
night out with the boys at Crown Bar and talk of a sexy blonde dance partner.

Things escalated when sources at Star tied JT to Rihanna, who he apparently started twittering with after a run in at the MTV VMAs
last month. This would, of course, confirm that big JT-Jessica break up.

Not to be left out, People Magazine chimed in, offering their two cents worth of “source’ry.” One trusted source claimed the couple is still together, while another
clarifies that JT and Jessica are together, but slowing things down, spending more time apart and reevaluating.

This version of events doesn’t deny the JT-Rihanna, but insists it’s a professional relationship and claims the only problem facing Timberlake and Biel is the distance created by their professions.

Everyone continues to speculate, but all we really know is that while the pair was photographed together just last Monday, this Monday finds them in different countries. Biel’s is on location in
Canada shooting the A-Team movie, while Justin was spotted playing golf in Burbank, California.

Oh, and we also know that clearly someone’s trusted sources are not to be trusted. We’re just saying.

Justin Timberlake and Jessica Biel: over?

Heidi and Spencer: not so happy anymore?