Jon Gosselin tossed a wrench into TLC’s plans to re-launch Jon and Kate Plus 8 as Kate Plus 8 in November. Jon claims he does not want his children filmed and that the exploitation of their childhood needs to end. 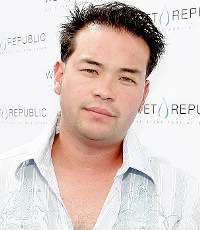 On October
1, TLC announced that it had suspended filming certain scenes of the Gosselin series (whatever title it goes by next). Jon Gosselin wrote a
letter to TLC executives at the end of this week demanding that all crews cease to be allowed in his children’s Pennsylvania home.

The letter arrived at TLC on the same day that Jon was pushed aside by the network for their new Kate Plus 8.

TLC issued a statement in response to Jon Gosselin’s request:

“We are aware of Jon Gosselin’s recent statements, and remain deeply disappointed at his continued erratic behavior. He and the family were shooting as recently as last Friday, without
incident, and his latest comments are grossly inaccurate, without merit and are clearly opportunistic. Despite Jon Gosselin’s repeated self destructive and unprofessional actions, he remains
under an exclusive contract with TLC. Direct filming of the children has been currently suspended, pending further conversations between both parents.”

Jon Gosselin goes for the throat

“As legal counsel for Jon Gosselin, I am totally confident that he will be completely successful in his quest to take back control of his family and preserve, protect and ensure their future
well-being by putting the brakes on his divorce and pulling the plug on TLC, the media giant that he perceives as a monster that has exploited and manipulated his family and has been partially
responsible for the breakdown of his marriage.

Jon is resolved not to allow the TLC Corporate machine to devour his family and promote the monster’s best interests over those of his family.

TLC and Discovery have been reputed to have generated approximately $186 million dollars for the quarter — compliments of the Gosselin Family, and Jon firmly believes that their greed to continue that cash flow will be trumped
by his courage and determination to protect his family.”

Where the Gosselin saga goes from here is anyone’s guess. If any pop culture wizard out there can predict where this bizarro yellow-brick road is going, they are doing no better than throwing
darts at story ideas on a dartboard.

Read on for more Gosselin news

TLC sends Jon to the curb with new Kate Plus 8