Away We Go, now on DVD and Blu-ray, is not to be missed. The sentiment here at SheKnows could not be more direct — see this film. 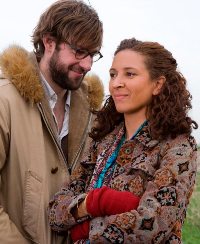 Audiences have never seen The Office star John Krasinski in such a liberating light as during the Away We Go cinematic journey. Krasinski’s performance alone would be worthy of witnessing the majestic magnitude of Away We Go.

Toss in the impeccable casting and career-making performance by Maya Rudolph as Krasinski’s pregnant partner and Away We Go is a film you will not soon forget.

Directed by Sam Mendes, Away We Go allows the helmer to keep things a little light after his emotionally-titanic Revolutionary Road with Leonardo DiCaprio and his wife, Oscar-winner Kate Winslet.

Films are meant to be seen on the big screen, but with that sentiment stated, films such as Away We Go are absolutely perfect on home video. Their intimacy is as powerful on a screen measured in feet as in yards. It is also the themes of Mendes’ films that resonate so powerfully.

Krasinski and Rudolph portray a couple expecting their first child on a trek to discover the perfect home to raise their baby and commence their new life together.

Rudolph’s Oscar-nomination-worthy performance is breathtaking, but she has heady company in Away We Go. SheKnows favorite, Catherine O’Hara, continues her decade-long streak of characters that stay with audiences long after the credits have rolled. 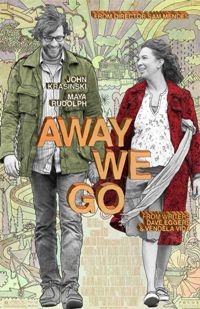 Maggie Gyllenhaal and Allison Janney join the fantastic females all over Away We Go. Krasinski is effortless around all this female talent The Dark Knight and Juno actresses weave a web in Away We Go that come close to scene-stealing.

The true star of Away of We Go is the comic chemistry between Rudolph and Krasinski. Sure, it is only one film. But, SheKnows looks forward to many more films with these two. Action, period drama or animated voice-over, Krasinski and Rudolph recall a smooth of interaction of Bogart and Bacall, the honesty of a Hepburn and Tracy with a touch of Woody Allen lovers.

Away We Go extras