Jon Gosselin is trying to block TLC from filming Kate Plus Eight after they dumped him from the show. 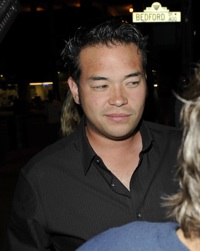 Jon has his manties in a bunch after TLC effectively dropped him from the show, renaming it Kate Plus Eight. Since Jon can’t make any cash shilling his fam, neither can anyone else, he says!

Jon hung a sign on the gate of the family home in PA reading, verbatim: “Notice: No film crew or production staff from TLC is permitted on this property under penelty of trespass – Johnathon
Gosselin”

Kate should be divorcing him for his undeveloped intellect as demonstrated by his spelling errors alone.

Jon’s lawyer sent a missive to TLC stating, “Effective immediately, no production crews are to enter Jon’s family home for any reason. In the event that anyone enters the marital
property, Jon Gosselin will notify the local authorities to effectuate police action against any trespassers.”

The same lawyer later told Entertainment Tonight, “Jon realized his family was like a trainwreck, so he decided to put the brakes on
the divorce and on the show… because if he didn’t the family would be in a mortal accident… the victims of a trainwreck.”

Interesting that Jon didn’t care about this trainwreck when he was still being paid to cause it.

TLC responded by calling Jon out — in the nicest, most family-friendly way possible, of course. They said in a statement, “We are aware of Jon Gosselin’s recent statements, and remain deeply
disappointed at his continued erratic behavior. He and the family were shooting as recently as last Friday, without incident, and his latest comments are grossly inaccurate, without merit and are
clearly opportunistic. Despite Jon Gosselin’s repeated self destructive and unprofessional actions, he remains under an exclusive contract with TLC. Direct filming of the children has been
currently suspended, pending further conversations between both parents.”

While all this was going down, Jon was seen caring deeply about his children’s welfare while partying in LA without them.

Jon Gosselin dropped by TLC for new Kate Plus 8