When John Travolta and Kelly Preston’s only son, Jett, passed away unexpectedly in January while the family vacationed in the Bahamas, Travolta could never imagined he’d be back in the Bahamas dealing with an extortion case.

Paramedic Tarino Lightbourn and his attorney, former Bahamian Senator Pleasant Bridgewater, are accused of conspiring to extort $25 million from Travolta for a document relating to Jett’s treatment. 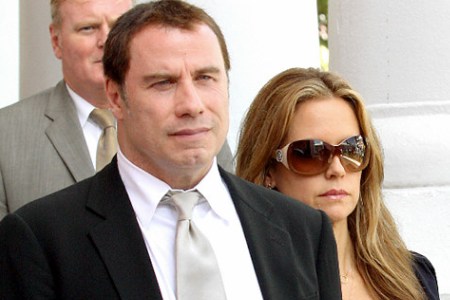 The pair has plead not guilty. Essentially, it’s a case of blackmail. Two weeks after Jett died, John was notified by his bodyguard and attorney that someone was demanding the large amount of
money, and if it wasn’t paid, a document he signed refusing to transport Jett to a local hospital would be “sold to the press.”

The plot thickened as an inspector, Sean Saunders, took the stand in the extortion trial to inform the court that an attorney for the Travoltas allowed a meeting with Pleasant Bridgewater to be
documented. The lawyer allowed police to set up recording devices in his hotel room so the meeting with the senator could be recorded.

Travolta returned to the witness stand — where he had recently been forced to admit Jett’s autism — showing no emotion in telling the Nassau court that Tarino said the document, if leaked,
would imply that Jett’s death was intentional and that John was somehow to blame.

The case has mentioned that threats were made directly through Travolta’s attorney and bodyguard. During cross examination, Travolta mentioned he was not called or threatened personally by
the defendants. After this last appearance, Travolta will probably not need to reappear in court. He was seen leaving the courthouse with wife Kelly Preston by his side, holding hands.