Tori Spelling has been hospitalized after experiencing mysterious stomach pains, not once but twice. 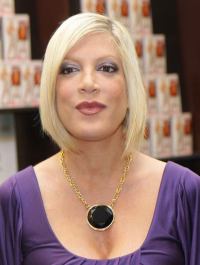 Spelling was released from a hospital and then readmitted with an undiagnosed stomach ailment.
In this technology-related day and age, her husband, Dean McDermott, tweeted updates on Twitter.

“T is in the hospital now with severe stomach pains. We’re trying to get her more comfortable.” He followed up the tweet with yet another update. “Just out of the hospital.
After a battery of tests, no conclusive answers. She still feels terrible. Hope it passes soon. She’s in a lot of pain.”

It could possibly be that time of year for the stomach flu but to be hospitalized twice with intense pain may be an ailment to the extreme. Actually, both of her children and husband were recently
sick. In fact, Tori calls it the “McDermott Family Bug.”

Here at SheKnows we hope that Tori has a speedy diagnosis and recovery from whatever ailment she’s suffering from. Being a celebrity means that being in the headlines is nothing new, in
particular for Tori who has her share of headlines this year. For starters, there’s the ongoing squabble she’s had with her mother, Candy Spelling.

Whether her fan base spans back to Beverly Hills, 90210 or her current reality show, Tori and Dean: Inn Love,
Tori’s certainly been in the spotlight for her acting talents, writing abilities (two New York Times best-selling books sTORI telling in 2008 and Mommywood in
2009), and of course, Spelling’s well documented personal life as well.