The episode is entitled Family Ties, given the brotherly biting since the Vampire Diaries’ explosive premiere, look
for the sibling rivalry to take a new turn tonight at 8 pm.

Courtesy of The CW, here is the inside scoop as to what is going down tonight on the show people cannot stop talking about — The Vampire
Diaries.

Elena (Nina Dobrev) asks Stefan (Paul Wesley) to escort her to the town’s annual Founder’s Party. Vicki (Kayla Ewell) gets Tyler (Michael Trevino) to ask her to the party, then accuses
him of trying to hide their relationship from his family. 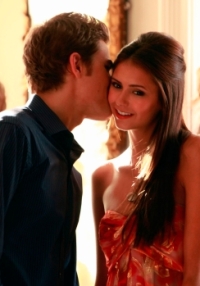 Finally, Stefan takes action to get Damon out of his
life for good.

Vampire Diaries is a hit!

As the fall season has rolled out, Vampire Diaries has held its own and become an enormous hit. When it comes to female teens, no show on at that hour has more viewers. In fact, with a
slew of new programs debuting, Vampire Diaries ratings show no sign of going south.