TV, movies, comedy, drama, actor Ryan Reynolds does it all and does it so well. 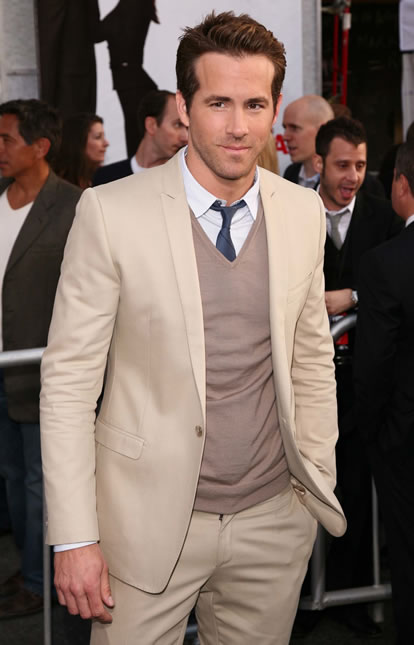 From Failure to Fame

Canadian Ryan Reynolds is the unlikeliest of stars: the heartthrob failed his high school drama class while starring in a Nickelodeon tween show called Fifteen. Yet since 1993 this prolific actor has racked up no less than 41 film and TV appearances, including the hit sitcom Two Guys, a Girl and a Pizza Place and his breakout hit National Lampoon’s Van Wilder.

Luck? Possibly. But with comparisons to Chevy Chase, Steve Martin and Jim Carrey, Reynold’s skill with comedic timing likely has more to do with it. Case in point: The Proposal, a romantic comedy co-starring Sandra Bullock. The electrifying comedic chemistry between the pair was enough to claim the number one spot in the box office its first weekend, knocking out The Hangover.

It isn’t all chuckles in Reynolds’ repertoire, though. He scared the bejeezus out of audiences in his turn as the murderous father in the remake of The Amityville Horror, a vampiric PI in Blade:Trinity and the mentally unstable mercenary Deadpool in X-Men Origins: Wolverine.

After a long on-and-off relationship with singer and fellow Canadian Alanis Morrisette, including a broken engagement, Ryan took up with buxom star Scarlett Johansson. The couple wed in September 2008 in British Columbia after a yearlong courtship.

So what’s next on the horizon for Ryan? While he and Scarlett contemplate starting a family — he has said in interviews that is definitely on the agenda for the future — he has three flicks due out in 2011, including Buried, The Green Lantern and Dead Pool. None of the three are comedies, but all should give Ryan a chance to flex those acting chops and show that old high school drama teacher who’s really the boss.

(Editor’s Note: Since this published, Scarlett Johansson and Ryan Reynolds filde for divorce simultaneously in December 2010.)