Courteney Cox’s Cougartown brought in some impressive numbers for ABC, but if you missed it, it’s not too late to find out why! 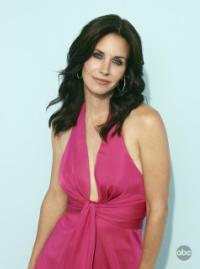 Truth be told, many
were turned off by the title and promos for the new Courteney Cox vehicle, but that didn’t stop 11.4 million viewers from tuning in for
last week’s premiere and learning that Cougartown was… well, funny!

Cox is charming, relatable and entertaining in a role created for her Bill Lawrence and Chris Koch, who she’d worked with during her short stint on Scrubs.

The writing duo pulled from the real life quirks and ticks of their star, who has seven years on real life hubby David Arquette, which may be
why her character Jules is not the canned, one-dimensional cougar some anticipated.

“The word Cougar gets a bad connotation, because you think of someone whose has plastic surgery, big lips, fake boobs and they’re trying to date somebody young because they’re fighting being
older,” Cox told SheKnows. “If you’re okay with who you are and even if you’re struggling with it, but not trying to change yourself to look 20? That’s fun!”

Enter Jules, a 40-year-old divorcee who is ready to finally have some fun again, but struggling against the insecurities anyone feels jumping back into a dating market thick with older women and
men dating hot young things.

That’s not easy, even for someone as gorgeous as Jules, who may look hot as hell in sexy lingerie for her own young stud, but only sees the jiggly belly flab she shows the camera in the first scene
of the pilot.

By the way, ladies, Cox did the body work for both those scenes (and all the others!) and told SheKnows looking good is all in the lighting: “I work out hard, but I had a baby, so at 12 in the
afternoon, when the sun is shining straight down on my body, it’s not great,” she admits. “But at 3 o’clock? I look great!” 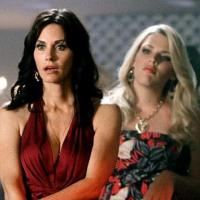 It’s that honesty from Cox
that makes her portrayal of Jules so much fun, but we should add that the star isn’t the only reason to tune in.

Jules’ gal pals are a total gas as they battle for her attention and play different sides as her devils advocates. You’re sure to recognize someone you know in Laurie (Busy Philips) or Ellie
(Christa Miller) and these ladies will say just about anything to each other, just like we will.

The relationship between Jules and her teen son Travis (Dan Byrd) is both relevant and goofy as the pair awkwardly tries to find their balance now that Travis is the man of the house, Mom’s
starting to date and Dad is mowing the lawns at school.

In other words, if you’ve been looking to add some laughs to your lineup, check out the premiere below — courtesy of ABC — and tune into Cougartown tonight at 9:30 pm on ABC.