It’s Glee Wednesday! This means at 9 pm it is time to break out the song and dance on Fox. No, we’re not talking about So You Think You Can Dance, Glee is where SheKnows has its heart for music, dance and a compelling story told by a charming cast of characters. 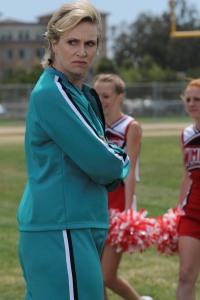 The song and dance abounds on Glee.
Guilty pleasure or simply fantastic TV, Glee continues to astound and build buzz week after week. SheKnows has the show’s second episode to give you a taste of the tantalizing
Glee.

Glee: what you missed

The plot is pretty simple and has been done in many forms before, but in the classic jocks versus geek battle, Glee tosses in a musical twist. Glee centers on the Glee Club, yes,
but it also is heavily centered on the football team and cheerleaders at an Ohio high school.

Stealing the show beyond the musical moments is the indelible comic steeliness of Jane Lynch as the cheerleading coach threatened by the encroaching popularity of the Glee Club.

In these trying times, budgets for public schools are ever-shrinking and Lynch’s Sue Sylverster as foil to choir teacher Will Schuester (Matthew Morrison) makes for a perfect television
rivalry for the ages.

In the past, the Glee Club has tackled a wide array of pop songs from their iconic rendition of Journey’s Don’t Stop Believin’ as well as Kanye West’s Gold
Digger.

This second episode of Glee illustrates why this show must be one of your must-watches. Thanks to Fox.