Have newlyweds and The Hills stars Heidi Montag and Spencer Pratt already hit the skids? 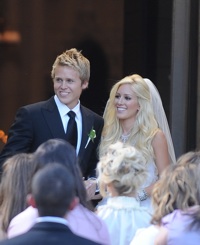 Spencer complained to the New York Post’s PopWrap that
the couple’s sex life has come to a screeching halt because Heidi wants a baby and he just wants his paycheck.

“I’m not even kidding, my wife — OK, I’m gonna get crass here — but we’re barely having sex because I’m scared that she’s gonna have a baby,” he said. “That’s the level our marriage is on right
now. I’m not even kidding — my wife has me debating cutting off my nuts.”

That would certainly save us the trouble.

Spencer and Heidi were spotted shopping at the hot LA baby shop Petite Tresor over the summer, sparking rumors that Heidi was already bring
the scourge of a The Hills baby to the world. Luckily, for once Spencer is being smart and having none of that.

Spencer went on to do even more damage to his fledgling marriage by pretty much flat-out saying he doesn’t trust his wife. Not at all. Not even a little. In fact, he’s pretty sure she would go off
her birth control without telling him and trick him into having a baby.

“She’s not the kind of person who would lie — she would just walk away and not answer the question,” he said. “So yes, I’m very concerned. Our sex life has dramatically changed recently.”

Thank goodness for that — it’s frankly surprising they haven’t sold a sex tape yet.