Sheknows has mixed feelings about the reported break up between Justin Timberlake and Jessica Biel. Assuming it’s true, we’re losing one of our most adorable celeb pairingsâ€¦ but that means uber hot Timberlake is back on the market! 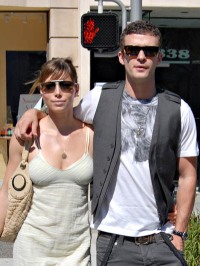 After almost three
years breaking up and making up, word of this Justin Timberlake Jessica Biel break-up came from a “pal” who told US that Timberlake
called things off about a month ago — over the phone! Ouch.

JT is described as “on the hunt” for some FutureSex/LoveSounds since the alleged breakup and was even spotted in a hot dance session with a blonde on September 9, which we’re hoping
was after the ill-fated phone call.

Timberlake and Biel were still together back in June when Lindsay Lohan’s Twitter page reported that she’d spotted him cheating. Lohan
later claimed her page was hacked, but The Daily News reported continued tension for the gorgeous couple a month later.

There were also reports that Timberlake was trying to win back Biel’s trust, which doesn’t quite match the tone of today’s big breakup news.

The US cover story has Biel “refusing to let go,” with sources slamming her for being “extremely needy” and “always keeping tabs on him.”

As if being broken up with via phone wouldn’t hurt enough!

Timberlake and his last love Cameron Diaz also broke up amid chatter about a JT dalliance, this time with Scarlett Johansson. To counteract the “speculation and the number of inaccurate stories that are being reported by the media,” JT and Diaz released
a joint statement that they’d broken up.

His first love Britney Spears, however, is still tainted by the rumors surrounding their breakup. JT managed to walk away the good
guy, leaving everyone believing she cheated on him, whether or not it’s true.

Speaking of truth…SheKnows won’t really believe this breakup is real until we hear official confirmation from the Timberlake and/or Biel camps and even then, we’re not sure we’ll believe it!

This isn’t the first break up for the pair since tabloids outted them as a budding couple in January 2007 and it certainly isn’t the first reported break up. Rumors were swirling just last April,
but were quickly quashed. All we can confirm is that no one’s quashed the story this time…yet?

Jon Gosselin “fired” from Jon and Kate Plus 8?