Vince Vaughn and Jon Favreau combine creative comic forces again for Couples Retreat. The comedy that is also quite romantic sports an all-star cast including Sex and the City star Kristin Davis and Kristen Bell. 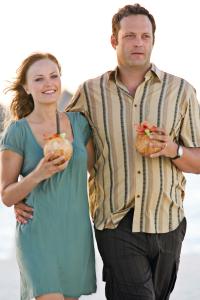 SheKnows covers Couples Retreat as no one else in Hollywood. In the first of our series on
Couples Retreat, we sit down with on screen couple, Vince Vaughn and Malin Akerman.

Next week, look for our chats with Jason Bateman and Kristen Bell as well as the SheKnows film review!

SheKnows: Filming in Bora Bora must have been so difficult. Seriously, I heard getting equipment there was a real challenge.

Vince Vaughn: You can’t go to a place like Bora Bora and complain about it afterwards because it’s kind of only Uptown problems, you know what I mean? Bunch of
Hollywood types saying, ‘it was so tough to get anything shipped there. Poor you.’ Meanwhile, you’re jumping out of your villa onto the ocean. The place is beautiful, it really is.

Malin Akerman: Nobody going to believe it’s real. That is how beautiful it is. When I first got here, I actually got into my room and had a little bit of a cry. It was so
beautiful. I’ve never seen anything that beautiful. It’s ridiculous that our jobs take us to places like this, it’s beyond beautiful. It really is paradise.

SheKnows: There are numerous hilarious moments, but the first that comes to mind is the yoga scene with the yoga guy. Where on earth did that come from Vince?

Vince Vaughn: I went to a Yoga class once and everyone’s there acting like this is normal and nobody has a problem with this gentleman that was dry humping these
girls — I don’t know how else to say it to be nice. He was holding their necks kind of weird. And they were all listening and making sure they were doing it well. I felt like I was in
the Twilight Zone, so I kind of thought that would be a funny scene to put in a movie someday. I finally got to do it with this one. I think anyone’s who’s ventured into this
world of spiritual tranquility has also experienced the creepy yoga guy.

Vince conquers his fear of sharks

SheKnows: Did you have any pre-filming fear of sharks? You spend a little bit of time in the water with a few. Were they real? 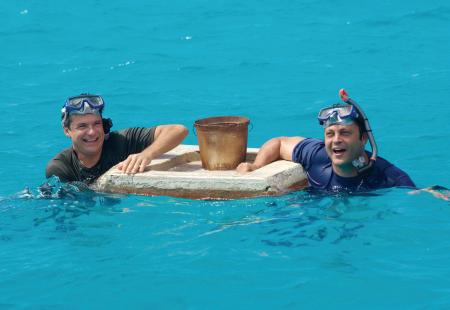 Vince Vaughn: We did do the scene with real sharks. And growing up the Midwest, a lake is a nice time for me, the ocean is a mystical place that I don’t belong. I’ve
always that way. I remember seeing Jaws when I was young, like a lot of kids, I was scared going in the swimming pool (laughs). I know there’s water and there’s this thing that
eats people. Salt water, regular water, I’m not taking any chances. For me, it was a big deal to get in the water with the sharks. But I got comfortable doing it. I’m glad that I did
it, but it’s not something I would seek out all the time.

SheKnows: Although the film is hysterical, the storyline carries it. Is it safe to say it’s a comedy with heart?

Vince Vaughn: The fun of this movie is we take those regular situations that everyone deals with and we find a fun environment to play those circumstances out in a comedic way. I
think the movie has some real hope and optimism to it in a really smart way which is one of the great things about the film.

SheKnows: Malin, with so many comic giants on that island, how did you ever get a word in without falling over in laughter?

Malin Akerman: I’m such a giggler and being around so funny people, it’s tough. It’s really tough. But, I’m trying to keep my act together because
it’s a lot of people and it’s long hours and of course when you start giggling, it doesn’t stop. Then, people don’t find it as funny as you for some reason. They’re
like, ‘we just want to get this movie made.’

SheKnows talks to Malin Akerman and Carla Gugino for Watchmen

The Coco Before Chanel exclusive video interview with Audrey Tautou