SheKnows takes a look at the films of fall
that hit the ground in October.

SheKnows movie fact: Shutter Island is based on the 2003 book by Daniel Lehane. The author behind previous page-to-screen successes Mystic River, Gone, Baby,
Gone) has a handle on serious drama that translates well on screen.

In the hands of Martin Scorsese and Leonardo DiCaprio, the team also behind The Aviator and Gangs of New York, will deliver a knockout punch guaranteed to stay with you long after
exiting the theater. 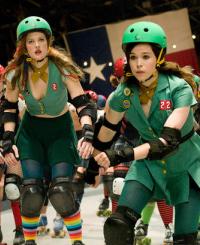 What it’s
about: Yup, you guessed it. Roller Derby rocks in Barrymore’s picture that shows that professional female athletes are not all three-point drainers and softball players (sorry soccer
– we miss you!). Page is a high school girl who escapes from her drab public school life as a hard-hitting Roller Derby Diva.

SheKnows movie fact: Whip It is Barrymore’s first directorial feature. After decades in the business, we could not be more excited to witness the magic she creates
wielding a camera. What will also be a curious sight is how recently fired SNL star Kristen Wiig does making the jump the screen. Normally, the move is made voluntarily by a Will Ferrell.
Again…we’re pulling for her!

What it’s about: Woody kills zombies and surprisingly, he’s good at it and funny in the process.

SheKnows movie fact: With the pop culture world overtaken by vampires who have been culled so many times over in Hollywood history, could zombies be next for a comeback?

Stars: The real stars are its directors and creators, Joel and Ethan Coen. After earning Oscar glory with No Country for Old Men, the brilliant storytellers return to the
simple storytelling roots with relatively unknown stars.

What it’s about: Larry Gopnik (Michael Stuhlbarg) is a 1967 professor who finds himself heading down a road that may not end very well for our professorial hero. Come on
– this is a Coen Brothers’ movie after all. It can’t end too happily if they’re going dark, and A Serious Man is hardly comedic.

SheKnows movie fact:
Theater veteran Michael Stuhlbarg has the film role of a lifetime. In the 14th film by the brothers Coen, Stuhlbarg could about to enjoy a Kathy Bates ala Misery Oscar-winning moment!

The classic Pixar films come back to the big screen in a double feature that SheKnows takes an inside look at in our Fall Family Film
Guide.

More than a Game

What it’s about: Think Hoop Dreams with a happy ending!

SheKnows movie fact: It’s incredible that filmmaker Kristopher Belman became embedded with a high school basketball team that possessed a player that would jump to the NBA
and become it’s best player (there…I said it!). The magic of this film is observing how this man, who is truly a gentleman, with the help of an incredibly supportive mother and coach,
found his way through the maze of modern inner city temptations to NBA glory.

What it’s about: Four couples head to paradise to work on their marriage as a favor to one of the couples. Upon arrival, the three other couples discover they are indebted to
the Zen Master of “Couplesville” to participate in couple building exercises. Considering Jon Favreau and Vince Vaughn believe they are heading to jet skis and spas — plenty of
laugh-out-loud hi-jinks ensue.

SheKnows movie fact: We screened the film in Hollywood and believe it is delightful fun. SheKnows cannot say anymore until our review is published October 9, but here’s a
sneak peak: prepare to laugh hard.

Stay tuned to SheKnows for our interviews with the Couples Retreat cast!

Up next…Carey Mulligan gets An Education and we find Where the Wild Things Are.