The Wizard of Oz turns 70 in classic Hollywood style — by getting a makeover! 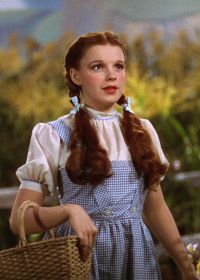 Wizardry is an often used
term in Hollywood to describe the work filmmakers produce. Watching how Warner Brothers has hit it out of the ballpark with the technical upgrade 70th anniversary edition of The
Wizard of Oz — now on DVD — illustrates who is is truly worth that moniker of magic.

There are 70-plus reasons to celebrate this marvel and Judy Garland is merely one.

The Wizard of Oz, of course, on its own would be a must for any family movie collection. Its’ messages are timeless, the songs are priceless and the film overall is as much a classic
as exists.

Still, after seven decades, The Wizard of Oz remains one of the best films of all time. It’s the kind of movie that stops the remote from flipping and therein you have it.

Any movie that can be viewed repeatedly belongs in the home collection — particularly if there are any families that are missing this classic.

A stalwart of anyone’s top 10 of all time, The Wizard of Oz’s themes are still relevant and now with the restoration of film and sound, the home video version of the
Wizard is as magical as its creators intended.

With Blu-ray only showing signs of increasing popularity, the public’s sentiment is the finer the digital picture, the better.

Whether it is High-Def television or hi-def home video, the classics need to keep up. With the 70th anniversary of The Wizard of Oz, the creative forces at Warner Bros Home Entertainment
found a perfect reason to update their classic with a digital shine.

Witness in these series of photographs — above and throughout — the job the restorers were able to do ensuring the best possible viewing experience for the viewer in the 21st
century watching a film from the early 20th century.

Judy Garland was always adored, but with her performance in The Wizard of Oz, Garland quickly became an icon.

In fact, some would argue Garland spent the rest of her career trying to capture the lightning of The Wizard of Oz once again.

Ruby Slippers. Wicked Witch of the West. “We’re not in Kansas anymore.”

The list of elements from The Wizard of Oz that have gone beyond pop culture lexicon to cultural icons is enormous — many are in the Smithsonian Institution. 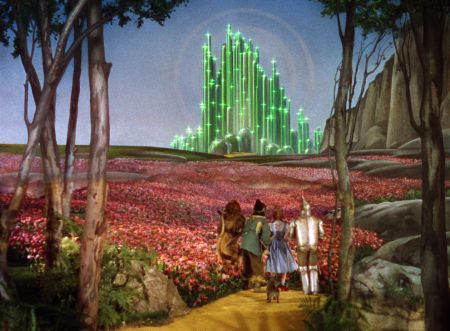 Witnessing where it all started in its purest form is truly priceless.

Legend has it that if you hit play on your CD player at the same time as pressing play on the DVD player, audiences witness a perfect harmony of Wizard of Oz and Pink Floyd’s
Dark Side of the Moon.

If that works for you or not it does not matter because the real DVD-based Sing-Along possibilities on The Wizard of Oz are priceless. Of course there is the soaring Over the
Rainbow, but fun family songs in this Hollywood classic also include If I Only Had a Brain and Follow the Yellow Brick Road.