Jon Gosselin has asked for a 90-day delay in his divorce. 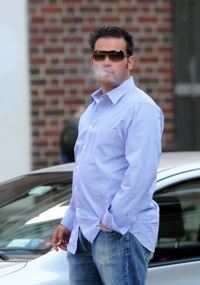 The request comes fast on the heels of another surprise
announcement: that TLC is phasing Jon out of his family’s reality show.

Jon was spending less time with the kids and more time hustling the ladies in
Vegas — not the type of family-friendly behavior TLC finds marketable. Kate will take over both the title and the paycheck.

And that paycheck may very well be what is motivating Jon to put the brakes on this divorce. Slowing down the process gives him time to attempt an image revamp, perhaps moving in the direction of
being the crowd favorite he used to be. (Remember when Kate was the evil one? Who knew she’s turn into the sympathetic character in this whole situation?)

Jon stated in court docs, “Even though we were heading for a divorce, it appeared that Kate had been suffering from this divorce as much as I had. That’s why I asked my attorney to put
the brakes on this divorce so I could try to regain control over the future of our family. So Kate and I could join on a cooperative course that would benefit our family — not destroy it. I regret
my conduct since Kate and I separated (on June 22). I used poor judgment in publicly socializing with other women so soon.”

Read: I don’t know how I’m going to pay the rent in my Trump Tower bachelor pad without my TLC paycheck so I’d better start sucking up to the ex.

Jon’s lawyer got one last cheap shot at Kate. “He is hoping to inspire his wife to become less rigid, inflexible and controlling and open up. We’re hoping Jon and Kate can sit down
together and start exploring what to do about their situation. Once they do that, the rest will fall into place.”

And Jon can pay his rent again.