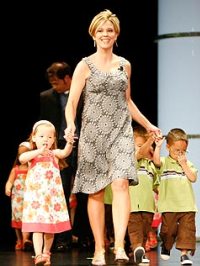 Jon and Kate Gosselin
announced their separation last June, proving there is such a thing as bad press, not to mention too much press. The tabloid chatter and ugly displays haven’t scored well for TLC’s Jon and Kate Plus Eight, at least.

The reality show phenom about raising 5-year-old sextuplets and 8-year-old twins has seen an 80 percent drop in viewership. TLC wants those viewers back, so they’re making some changes to the show,
as reflected by the new name.

“The family has evolved and we are attempting to evolve with it;” TLC prez Eileen O’Neill explained in a statement. “We feel that Kate’s journey really resonates with our viewers.”

So while the show will maintain a similar focus on raising such a massive family, there will be a lot less Jon in the story. He’ll show up
occasionally, but fans can expect a “deeper focus on Kate’s role…and her journey as a single mother.”

For the record, Kate’s journey has so far included a recent guest run on The View, talk of a new project for 2010, rumors she shot a pilot for a Food Network talk show and speculation
about her launching her own talk show for moms.

Jon, on the other hands, has faired about as well as the show has. It seems folks aren’t attracted married men who pose with young lovelies too soon after a split.

TLC is hoping that with Jon less in the picture, fans will return, but Jon hasn’t thrown in the towel. He’s already filed to suspend divorce proceedings for 90 days, released a statement that he’d
like “to get back with Kate as a partner in parenting,” and admitted he “used poor judgment in publicly socializing with
other women so soon.”

Sounds to us like some desperate dog paddling, but you can tune into Larry King Live tomorrow to hear what Jon has to say for himself.

Clues to the Jon and Kate divorce drama