Daniel Craig and Hugh Jackman are starring on Broadway together in A Steady Rain. The only thing more pervasive than fantastic acting at a recent performance, was an incessively ringing cell phone. The two stars handled it with grace and humor. 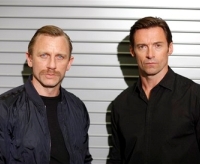 Although announcements are made prior to performances requesting that theater goers turn off their cell phones, one recent performance included a audience member who shall we say was a bit negligent in this area.

Unfortunately the ringing continued as we can imagine the person was probably too embarrassed to pick it up or at least shut it off at that point. 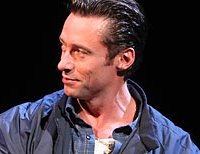 “C’mon, just turn it off – unless you got a better story and you wanna get out and tell your story!”

Ah, good old Hugh Jackman. The audience erupted in laughter and cheered and then the show finally went on. For a bit.

Until the phone rang again. At this point his co-star Daniel Craig said, “‘Can you get that, whoever that is? Can you get it? We can wait, just get the phone.'” Jackman chimed in, “Don’t be embarrassed, just grab it. We’ve all done it!”

That was apparently the last of the case of the missing cell phone but theater goers were in for an unexpected ad lib treat during that performance. Suffice it to say that Jones Bond and Wolverine do not disappoint!