This is It, the film chronicling Michael Jackson’s final days, has broken records for advance ticket sales.

Michael Jackson fans, unite! It doesn’t feel like Michael Jackson is gone nor does it feel like he’ll ever be forgotten,
especially when his name never leaves the headlines. Whether it’s in our country or all corners of the globe, fans are lining up to get a glimpse of his concert rehearsals prior to his
untimely death in the film This is It. 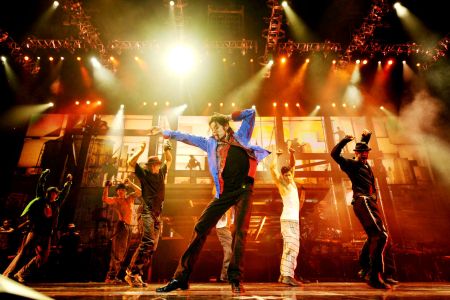 Filmed only weeks before Michael Jackson’s death, the film is based on rehearsal footage. Sure, it doesn’t open until October
28 but that didn’t stop countless fans in purchasing tickets to the now sold-out shows.

Even outside of America more than $1 million in ticket sales were issued in Japan on the first day they were available. According to Sony Pictures, this indeed smashed records!

As for across the pond in London, fans bought more than 30,000 tickets to This Is It on the first day which easily surpassed early ticket sales for other films popular in Great Britain
like Harry Potter and Lord of the Rings. As for other countries, their ticket sales proved that MJ’s popularity has not diminished. If anything it seems like it’s
growing! Fans lined up on sidewalks to get tickets in Paris, Bangkok and Munich, according to Sony Pictures.

Sony paid approximately $60 million for the footage to make the movie, This Is It. Rehearsal footage was filmed as he prepared for fifty sold-out comeback shows in London.