My Name is Earl star Jaime Pressly said “I do” to beau Simran Singh on Saturday, September 26 in a quiet, Malibu affair. 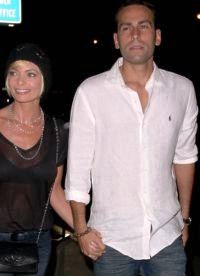 No stranger to paparazzi mayhem,
Pressly and Singh kept the details of their wedding hush-hush. Now that she’s done
the walk down the aisle, however, the story is trickling out.

Among the family and friends on hand were matron of honor Danielle Manschulo, who introduced the bride and groom, and Pressly’s two year old son and ring bearer. Dezi James, 2.

This is the first marriage for both Pressly, 32, and Singh, 30, but Pressly was previously engaged to Dezi’s daddy, disc jockey Eric Cubich.
They called it quits last November. Previous to that, she was paired with cuties like Simon Rex, Wilmer Valderrama,
Mario Lopez and Kid Rock.

Singh is equally as handsome as her past beaus, but as a lawyer representing platinum music producers Luny Tunes, Infamous, AB Quintanilla III and others, he’s more of a behind the scenes player
than the celebrities she’s dated in the past.

Their engagement news hit the wires on August 1 and soon after, Pressly’s bridal shower caused a hubbub: The paparazzi caught her peeing on the street in broad daylight! She Tweeted that she wasn’t
really peeing: She was just pretending.

‘Yes…that is me doing dare #8 at my bridal shower,” she explained to Twitter pals. “Things are not always what they seem.”

She also went on the record about her big day and what she expects from life as a married woman.

“I’m looking forward to being a missus,” she said. “I’m very excited to be in a partnership and have some stability that I haven’t had before in my life…. It is great to have someone who
shares everything with you, to help carry the bags and Dezi and to have somebody who can carry his own weight.”