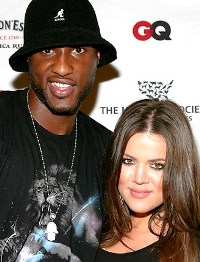 The Kardashian clan knows how to
throw a party in Hollywood and Sunday’s nuptials for Khloe Kardashian and Lamar Odom has to be their biggest and most successful.
When it comes to Kardashians, attention from the media is as important as to what is being served for dinner at a fete. So, to see the paparazzi and celebrity turnout at Khloe’s wedding, call
it a resounding success.

Not only were fellow Los Angeles Lakers there, such as future Hall of Famer Kobe Bryant and his wife, Vanessa, but Mr Hollywood himself, Ryan Seacrest. The American Idol host is producer on the Kardashian series of shows.

Photos of the actual event are hard to come by because right before they said “I do,” Khloe and Lamar secured a deal with a publisher rumored to be worth $300,000.

The wedding of Khloe Kardashian and Lamar Odom begins a new chapter in each of their journeys — how long this chapter will be, is still
being written. We wish them well, but have a feeling the Khloe-Lamar chapter will be quite short.

As more details of Khloe’s wedding arrive — as well as photos! — SheKnows will bring it to you!